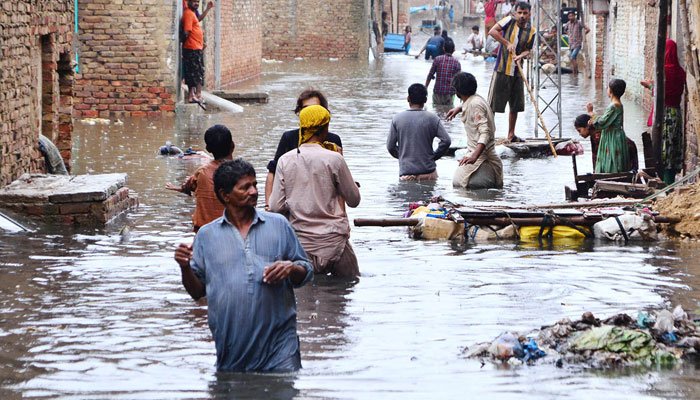 Areas which received light, moderate and heavy rains include Tando Allahyar, Sanghar, Hyderabad, Matiari,  Mirpurkhas and Badin. More than 400 mud houses collapsed as a result of recent showers. Over 10,000 people were displaced from villages inundated under rainwater.

Heavy rain caused the inundation of the low-lying areas in Tando Jam where buffaloes drowned up to their necks under accumulated rainwater. Hyderabad, which has been submerged in rainwater for several days now received 101 millimetres of more rain during the last 24 hours.

The water from the nearby canals deluged the localities in Nawabshah, leaving residents trapped in their houses. The Nawabshah airport has also been closed owing to heavy downpours.

The situation in Kandiaro is also bad. The breach in the Pano Aqil canal has widened to 300 feet, leaving over 400 houses affected and deluging thousands of acres of land.

In Sukkur, the roof of a portion of the Deputy Commissioner’s office caved in. Several streets, roads and localities are still inundated under rainwater even after a week. Boats are being used for commute.

Water could not be drained from markets and commercial areas in the city.

Heavy downpours that lashed Dadu for at least 21 hours submerged everything under rainwater in the city.

The water level rose due to constant showers at Zero Point in the Badin district, allowing the water of the canal to pass over the bridge.

In Thatta also, rains have impacted the daily life and animals. Even the government buildings have been affected owing to the rains.

Amid a dire need to help flood-hit people, Sindh Chief Minister Murad Ali Shah, in a televised message, urged philanthropists to come out and help the affected people of the province which is “enduring a catastrophe like never before.”

Sindh government has announced the Sindh Flood Relief Fund for affectees of the ongoing torrential rains and flooding in the province, a notification issued by the provincial finance department read.

The fund has been initiated to seek financial support for victims in the province hit hard by extreme weather patterns.

“We are trying to arrange tents, mosquito nets, beds, edibles, medicines, and other items for affectees,” he said, ensuring the provision of all essential items within a few days.