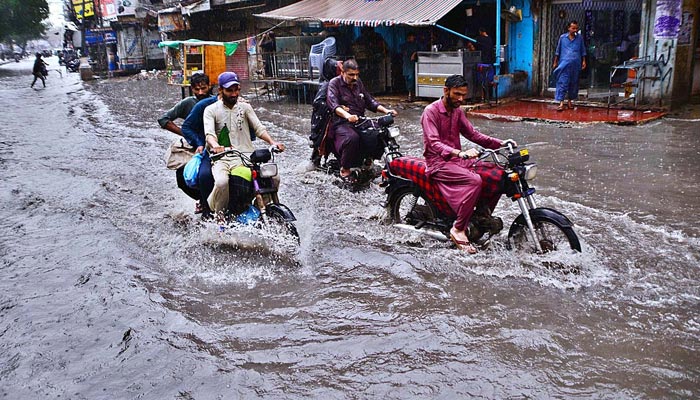 Above-normal rain in Sindh, which has flooded hundreds of villages and low-lying areas in cities and towns across the province, has disrupted routine life and led to the deaths of hundreds.

In view of the misery caused by the rains and the latest Pakistan Meteorological Department (PMD) advisory, the Government of Sindh on Tuesday announced the closure of schools and colleges across the province for two days.

The move followed the Board of Intermediate Education (BIEK), Karachi, announcing the postponement of exams scheduled for August 24 and 25.

A report released by the PDMA has noted that more than 1.9 million people in Sindh have been adversely affected due to heavy rainfall.

It said that 263 deaths were reported in Sindh, including 120 children and 35 women and 30,150 cattle died in rain-related accidents.

Meanwhile, a total of 701 injuries were reported across Sindh, including 144 children.

The PDMA also said that approximately 104,000 houses were completely destroyed while the infrastructure of 225,677 houses was damaged.

Amid country-wide flooding, Pakistan Army troops are busy in rescue and relief operations in flood-hit areas of Sindh, Balochistan, Khyber Pakhtunkhwa and Punjab.

According to Inter-Services Public Relations (ISPR), rescue and relief efforts are underway in Hyderabad, Sanghar, Badin, Thatta, Jamshoro, Noshero Feroz and various other districts of Sindh.

Special army helicopters were flown from Karachi to affected areas of interior Sindh to speed up rescue and relief efforts.

Food supplies are being distributed in affected areas and medical aid is also being provided to the affected people.

In Punjab, Pakistan Army helicopters have assisted civil administration in the distribution of relief goods for flood-hit people in far-flung and inaccessible areas of DG Khan district.

The PMD released an advisory earlier in the day forecasting more rains in the country during the week.

The Met Office said that a well-marked low pressure located over east Rajasthan, India, is likely to move in the northwest direction and approach Sindh tonight.

“Due to this strong weather system monsoon currents are penetrating in southern and upper parts of the country,” the PMD warned.

Under the influence of this weather system: