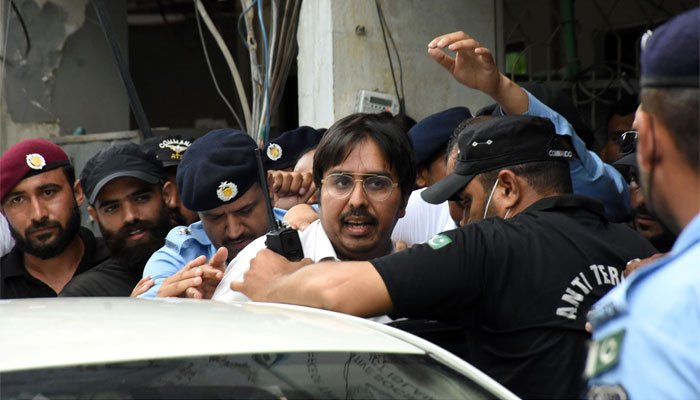 PTI’s senior leader Shahbaz Gill is willing to apologise for his controversial remarks, his lawyer told a district and sessions court in Islamabad when it resumed hearing Gill’s bail plea in a sedition case on Monday.

On August 9, Gill was arrested from Banigala Chowk in the capital a day after making controversial remarks on a private TV channel. He was subsequently booked on charges of sedition and inciting members of state institutions against the Pakistan Army.

At the outset of the hearing, the Islamabad Capital City Police  presented the case record in court as directed by the judge at the last hearing of his bail plea.

Additional District and Sessions judge Zafar Iqbal resumed the hearing on the bail plea this morning.

During the hearing, Gill’s lawyer Burhan Moazzam asked if he can see the case records submitted in court by inspector Arshad.

The court directed the inspector to show the record to the lawyer. However, prosecutor Raja Rizwan Abbasi objected that they cannot show the supplementary challan of the case.

After the hearing restarted, Gill’s lawyer maintained that the police didn’t show the statement recorded under Section 161.

“The police is showing all statements except for Gill’s,” the lawyer said.

At this, the court directed the police to show Gill’s initial statement to the defence lawyer.

The arguments are underway.

In the last hearing, the Islamabad court gave the capital’s police the last chance to submit records pertaining to the sedition case against the PTI leader by Monday with his lawyers terming the delay “unfortunate”.

The police, during that day’s hearing, told the court that the investigation officer — who is in Karachi and has the records — could not be reached and his phone has also been switched off.

Special prosecutor Rizwan Abbas told the court that he wanted to see the records first before he could present his arguments.

At this, Gill’s lawyers said that it was “extremely unfortunate” that the police were delaying the matter.

In response, Additional District and Sessions Judge Tahir Mahmood Supra said that he was giving one “last chance” to the police to present the records by today (Monday).

Gill is facing serious charges after he allegedly incited mutiny within the military while speaking on a private TV channel earlier this month.

He was already facing sedition charges, but the Islamabad police had also registered a case against the PTI leader over possession of an illegal weapon.

He was booked in the case after police raided the incarcerated PTI leader’s room in Parliament Lodges last week — where they recovered weapons, a satellite phone, and foreign currency.

The PTI, since Gill’s arrest, has been repeatedly alleging that he has been tortured, humiliated, and sexually assaulted in police custody, however, the police and government deny all claims.

During the raid at his Parliament Lodge’s residence also, Gill told journalists that he had been “sexually assaulted”.

The Human Rights Watch (HRW) has demanded an immediate, independent, and transparent investigation into the alleged torture of Gill in police custody.

Currently, the PTI leader is on judicial remand in the two cases which will end on September 7.