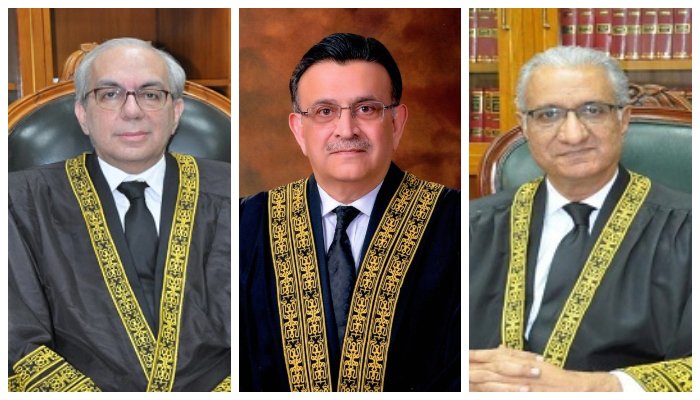 ISLAMABAD: Supreme Court Monday resumed hearing the petition on Speaker Punjab Assembly Pervez Elahi’s petition on the election of the province’s chief minister — where he was defeated after PML-Q’s votes were rejected.

Last week, the top court asked Chief Minister Punjab Hamza Shahbaz to stay “trustee” CM till Monday (July 25) and limited his powers, noting that if he appoints someone against merit, it will be considered null and void.

Punjab Assembly Deputy Speaker Dost Mazari had dismissed PML-Q’s 10 votes after party head Chaudhry Shujaat asked them to vote in favour of Hamza, but they did not follow his instructions.

But the PTI and Elahi did not accept this and approached the top court.

At the outset of today’s hearing, Advocate Latif Afridi — the former head of the Supreme Court Bar Association (SCBA) — came to the rostrum and pleaded to the court on behalf of lawyers’ bodies, saying the system is facing dangers as there are numerous challenges.

“The review petition in the Article 63(A) case should be fixed before a full court,” Afridi said, as he noted that the political crisis in the country was deepening over time.

At this, CJP Bandial said that he was honoured that the former SBCA chief had put the matter before him, but noted that the court would take a decision after hearing all parties in the case.

CJP Bandial said that he did not want to issue a one-sided order and neither would he arrive at a decision under the advice of 10 former presidents.

“We need to hear the other side of the story as well,” he said. At this, Afridi said that a full bench should be constituted and the available judges should be included.

Ban imposed on entry of political leaders in SC

The entry of all political leaders to the Supreme Court has been banned for the hearing on the case related to the election of the Punjab chief minister.

Apart from this, only parties to the case will be allowed to enter courtroom number one. Court proceedings can be heard through speakers in rooms six and seven of the SC.

Earlier today, Punjab Chief Minister Hamza Shahbaz filed a petition in the apex court to constitute a full court on the issue of the election of a CM for Punjab.

In the petition, it has been stated that the ruling given by Deputy Speaker Dost Mohammad Mazari on July 22 is valid, while Chaudhry Shujaat Hussain’s letter to his lawmakers is in accordance with the Constitution and the law.

The petition further stated that the Election Commission of Pakistan had upheld the instructions given in the letter written by Imran Khan against the defecting members.

Hamza requested in the plea to hear the appeals of the defected members against the ECP.

The coalition government rulers held a press conference hours before the hearing started and demanded that a full court hear the case, not three judges.

PML-N Vice President Maryam Nawaz said that “bench-fixing” is a crime similar to “match-fixing” and suo motu notice should be taken over it as she criticised a “specific” anti-PML-N bench being constituted for one-sided decisions.

PPP chairperson Bilawal Bhutto, too, reiterated that the coalition government only has one demand: the formation of a full bench to hear the case related to the Punjab CM’s election.

“This cannot happen that three people decide the fate of this country. Three people cannot decide on whether this country will run on a democratic, elected or selective system,” he said.