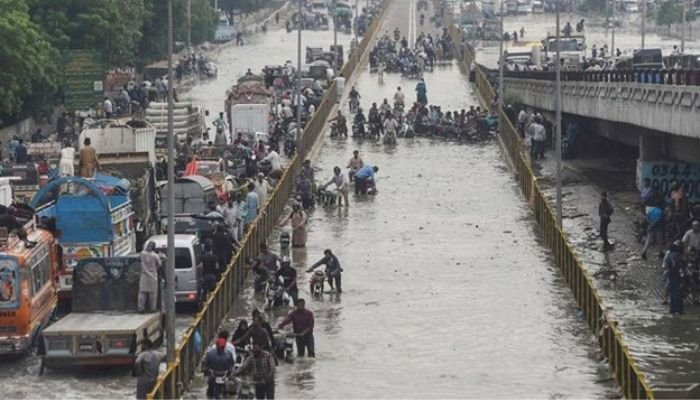 Four people were killed and many others injured in Karachi on Sunday when the second spell of torrential monsoon rains wreaked havoc in the port city, flooding residential and commercial areas, killing and injuring people, damaging properties and disrupting the power and telecommunication system.

A teenage boy, identified as Zia, was electrocuted in the Liaquatabad area. He was taken to the Abbasi Shaheed Hospital. The family said he received an electric shock from a service mast.

Also read: Why does Karachi flood whenever it rains?

A 40-year-old man, identified as Shan Hussain, was electrocuted near the Memon Masjid in the limits of Kharadar police station. His body was taken to the Jinnah Postgraduate Medical Center.

Meanwhile, a couple and their two kids were injured as the roof of their house collapsed in Korangi.

A couple and their two minor children were wounded after a wall of their house collapsed on them in Baldia Town within the limits of Saeedabad police station.

Police and rescuers reached the property took the family to the Civil Hospital, Karachi. They were later identified as 35-year-old Nadeem, his wife Pathani, two year-old-son Krishna and daughter Samina, 5.

Meanwhile, the Pakistan Meteorological Department (PMD) Sunday released the rainfall data of Karachi since the morning. According to the data, Quaidabad received the heaviest rainfall, measuring 86.5mm.

After Quaidabad, the areas of the port city of Saddar and Gulshan-e-Hadeed each got 62mm of rain.

On the other hand, the Pakistan Air Force (PAF) Base Masroor and Keamari recorded 54mm of rainfall, while Orangi Town recorded 49.5mm.

“Intermittent showers are expected to continue till 12pm tomorrow,” forecast the PDM. It said the current spell of monsoon rain was likely to continue for the next three days. The weather department warned that the heavy rainfall may cause flooding and waterlogging in the city’s low-lying areas.

In view of flooding, the Sindh government announced a public holiday in Karachi and Hyderabad divisions on Monday (today).

Taking to Twitter, Sindh government spokesperson Murtaza Wahab wrote that apart from Karachi, there will be a public holiday in Hyderabad too because of the rain.

“Due to heavy rainfall which is expected to continue even tomorrow, the Sindh government has decided to declare Monday, the 25th of July, as a public holiday in Karachi and Hyderabad Divisions,” tweeted Wahab.

Though the rain turned the weather pleasant, the rainwater inundated streets and bazaars in the city, causing inconvenience to the people and disrupting the flow of traffic. Some vehicles broke down in the rain and the people were seen pushing them.

The flash floods also disrupted the electricity supply in some places.

Several villages were flooded in Purwa tehsil after a drain started overflowing due to heavy rains. The floodwater accumulated inside homes and caused damage to them.

It was said that the heavy flooding, which also destroyed standing crops, caused damage to several mud-thatched homes.

People in the area have asked the government to help them and give them money for their losses.

On Friday, the heavy rains caused flash floods in the low-lying areas in Kiri Khaisore Union Council and its surrounding places, causing damage to several houses and standing crops.

Local people said it had been raining in Dera Ismail Khan for the last week, which had turned the weather pleasant, but caused flooding in Kiri Khaisore Union Council and its nearby localities.

Several houses were damaged by the floodwater, and standing crops and orchards were destroyed. The farmers lost a lot of money because of this.

Standing crops in the far-off Kandia tehsil of Upper Kohistan were also destroyed by flash floods.

“Continuous rains and flash floods have destroyed many houses and standing crops.” And small hydropower stations installed at local streams to supply power to local communities have also been swept away,” Abdul Hafeez, a local, told reporters.

The rains, which started some three days ago, have still been lashing, causing land and mudslides that blocked roads and inundated slum houses in remote parts of the Hazara division.

The Kandia valley in Upper Kohistan was the worst hit as many houses were inundated, but no loss of life was reported anywhere in the entire tehsil.

“Though no loss of life has been reported in the entire tehsil, people have suffered financial losses as their houses have been destroyed and roads leading to the rest of Kohistan have been blocked because of mudslides,” Abdul Hafeez said.

Meanwhile, the Chairman of the National Disaster Management Authority (NDMA) has contacted the Sindh government authorities following the directives of Prime Minister Shehbaz Sharif, said the Authority spokesperson, adding that they discussed the situation after the recent monsoon rains.

The authorities have assured the Sindh government of maximum assistance, the NDMA spokesperson said.

The recent rain spell has been lashing Karachi for the last few days, causing floods.

In a statement, the PM Office Media Wing said that the prime minister also told the National Disaster Management Authority (NDMA) to help the provinces and departments as much as possible.

The premier said protection of property and the lives of the people in the low-lying areas must be ensured.

He also wanted the elected officials to keep an eye on the rescue and aid efforts started by the right departments.

Meanwhile, at least 100 people have been killed and 57 others injured so far in rain-related accidents across Balochistan, says the Provincial Disaster Management Authority (PDMA). It said women, children, and men were among the victims.

“Overall 6,063 houses came down, while 550 kilometres of road track along the four major highways in the province also got damaged.

In addition to the livestock losses, the authority said 712 animals were also killed during the heavy downpour.

The provincial government has already imposed Section 144 across the province amid forecasts of more heavy rains. According to the notification, under Section 144, people will not be allowed to visit rivers, dams, and other water bodies.

Swimming in rivers and water streams will also be banned, it said, adding that the ban will remain in place for one month.