Red Zone sealed ahead of PTI protest against ECP 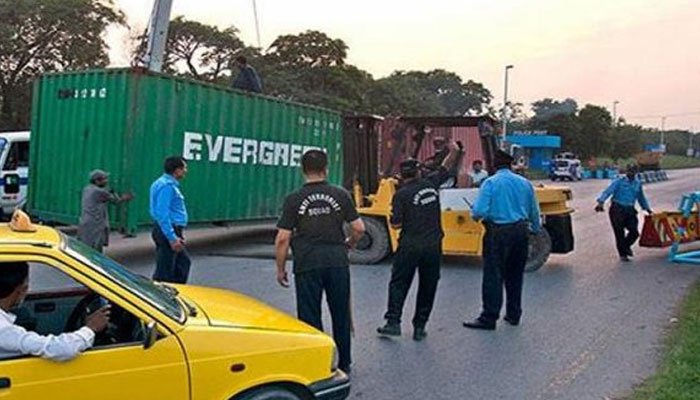 After the Pakistan Tehreek-e-Insaf (PTI) announced to stage a protest against the Election Commission of Pakistan today, Islamabad’s district administration sealed the red zone and placed containers at the entry points of the federal capital.

On Monday, Chairperson PTI Imran Khan had announced a protest and called on his supporters to gather outside of the ECP headquarters in Islamabad on Thursday, demanding Chief Election Commissioner (CEC) Sikandar Sultan Raja’s resignation.

According to sources, entry into the red zone is banned for protesters and all unconcerned people. Personnel of the law-enforcement agencies including anti-riot force, Rangers, the FC and police will be deployed around the red zone.

Entry into the red zone will be allowed only through Margalla Road.

During an exclusive interview with a private TV channel yesterday, Imran Khan alleged that the electoral body was not bringing forward the funding of the Pakistan Muslim League-Nawaz (PML-N) and Pakistan Peoples Party (PPP).

“We will go to the Supreme Judicial Council of Pakistan against the Election Commissioner as he has insulted us by calling us the foreign-funded,” he said.

“We will also protest peacefully in front of the Election Commission’s premises.”

“We will not go to Redzone,” he clarified.

Addressing a press conference along with Information Minister Marriyum Aurangzeb on Wednesday, Interior Minister Rana Sanaullah warned PTI of strict action against those who try to enter the Red Zone.

“PTI wants to spread chaos in the name of the protest,” the interior minister said, revealing that the coalition government has “received reports” and has found statements of Khan and Fawad Chaudhry regarding their plans of creating an anarchic situation outside the election commission.

He said that they [PTI] can attack the election commission; however, they should remember that the Islamabad High Court has imposed restrictions on staging protests in the Red Zone.