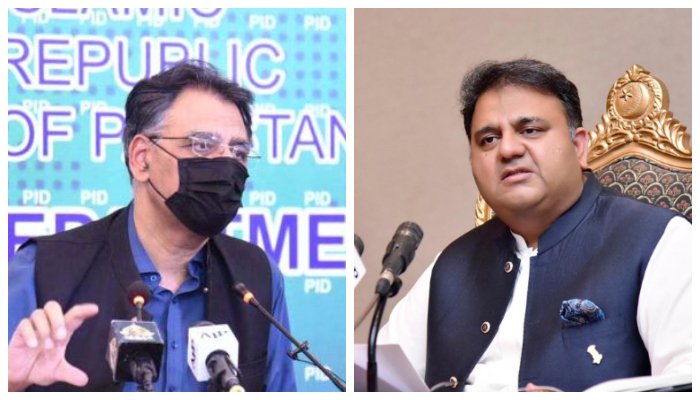 In a strong response to PML-N Vice President Maryam Nawaz’s acquittal in a corruption case, PTI said that it was the “real reason” behind PTI Chairman Imran Khan’s ouster.

The PTI has been building a narrative since its ouster in April that the party’s removal from the government was the incumbent rulers’ strategy to get themselves acquitted of corruption.

PTI Senior Vice President Fawad Chaudhry claimed that the state institutions have lost the nation’s confidence and said that their decisions have “no value” in the people’s court.

“Beyond any doubt, it is another dark day in the history of Pakistan,” he added.

In a tweet, PTI Secretary-General leader Asad Umar said: “Inflation is increasing day by day and cases of imported government leaders are being dismissed daily.”

“These are the main reason[s] for which Imran Khan was removed through conspiracy.”

PTI’s Babar Awan said the jail department would teach lessons about the Sharif family to prisoners so that they can get NRO II as well.

PTI leader Khurram Sher Zaman said “regime change conspiracy” has come out on top after the ruling and not the PML-N.

“Although Nawaz has no plans of coming back to Pakistan, Maryam will be planning on going to London after getting her passport,” he claimed.

An accountability court, just ahead of the 2018 General Elections, slapped Maryam with a fine of £2 million and sentenced her to seven years of imprisonment for being “instrumental in concealment of the properties of her father” and one year for non-cooperation with the bureau — sentences for which were due to run concurrently.

Today, the Islamabad High Court (IHC) exonerated PML-N vice-president and her husband Junaid Safdar in the Avenfield reference, nullifying the conviction handed to them in 2018 by an accountability court.

In conversation with journalists after the IHC ruling, Maryam slammed Khan and said that this is how “lies come to an end”.

Maryam asked the PTI chairman what would he do now as he has been proven “a liar” and “a conspirator”.

Maryam told Khan that he was a “helpless” person now and whether or not he decided to answer for his deeds, history will ensure he remains accountable for his actions.

In response to a question that the case was registered against her before the PTI came to power and that some other powers were behind it, Maryam said: “Who was the beneficiary of all this? Had Nawaz remained here, then even in three lifetimes, Imran could not have come to power.”

Shedding light on the alleged audio leak of Khan and his then-principal secretary Azam Khan, Maryam said she wasn’t surprised when the sound bite surfaced.

“This person, who spread destruction, divide, and anarchy in Pakistan, remained in power for four years. He does not even know how serious it is to play with national security,” she said.

Maryam said when Khan got to know that the vote of no-confidence would succeed against him since even his party’s lawmakers were not ready to support him, he concocted a “conspiracy” that his government will be ousted through a US-backed plan.

“He played with the country’s fate. He thinks of the country as a game and tampers with its future, just like he did at Lahore’s stadium,” she said in response to Azam’s alleged comments of tampering with the minutes of the meeting — in which Khan planned on calling then-foreign minister Shah Mahmood Qureshi and ask him to read out the alleged threat letter.

The PML-N vice president said that the government-formed joint investigation team (JIT) to probe the audio should conduct daily hearings like the JIT that investigated the Panama leaks case.