Rana Sanaullah should be worried as we will come to Islamabad prepared: Imran Khan 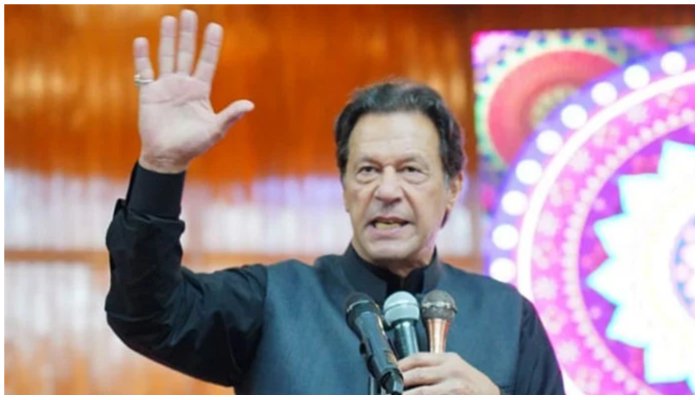 ISLAMABAD: PTI Chairman Imran Khan on Thursday issued a warning to Interior Minister Rana Sanaullah and said that “he should be worried” because the PTI will be marching towards Islamabad with “full preparation” this time.

Speaking during a workers’ convention in the federal capital, the former premier recalled that back on May 25, the PTI was not fully prepared to deal with the way the federal government had dealt with PTI workers.

On May 25, PTI’s long march to Islamabad caused disorder after Khan directed his supporters to enter the Red Zone.

“We promise you that you will not be able to hide in Islamabad,” Khan told Sanaullah, adding that he will make a decision on Saturday about giving a call to the public to take to the streets.

“I will ask people to come out of their houses once our tigers are ready for freedom,” he said. “We will provide real freedom to this country.”

Criticising the coalition government once again, Khan said: “They are closing the corruption cases filed against them and are burdening the masses with unprecedented inflation.”

He said that as per the International Monetary Fund (IMF), electricity prices will be further increased, which will put an additional burden on the masses.

“Their [the leaders of the ruling coalition] purpose to come into power was not to serve the masses to hide their theft,” he said.

He further claimed that the former, PTI-led government had held discussions with Russia regarding the import of cheap oil and wheat but before anything could materialise, he was removed from power.

“Pakistan is currently going through the worst inflation in history but these leaders do not have the guts [to talk to Russia] regarding the import of cheap oil or wheat [for the fear of the West].”

Last week, Prime Minister Shehbaz Sharif held a meeting with Russian President Vladimir Putin and talked about pipeline gas supplies to Pakistan as part of the necessary infrastructure already in place. The two leaders had spoken on the sidelines of the Shanghai Cooperation Organisation (SCO) summit in Samarkand, Uzbekistan.