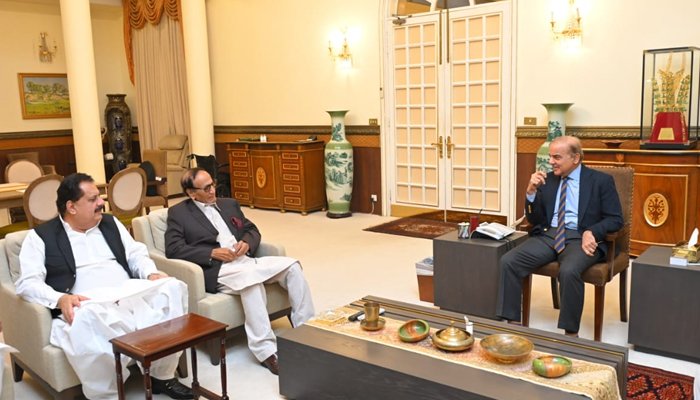 According to an official release by the PM Office, Shujaat met PM Shehbaz at his office and discussed the country’s political and overall situation.

The meeting also agreed that all the political allies of the government must continue to work together for the social and economic uplift of the public.

The meeting comes just two days after PM Shehbaz’s statement that if Punjab undergoes any political change, then it would be only constitutional.

Last month, Daily Jang reported that at least 50% or more of PML-Q lawmakers in Punjab were in contact with the party president Shujaat — a cousin of the province’s chief minister, Chaudhry Pervez Elahi, who is a strong ally of PTI.

Shujaat and Elahi, who were considered to be extremely close, drifted apart earlier this year when the former decided against supporting the latter for the CM post.

“Most party lawmakers have agreed to back Shujaat’s decisions — putting PTI at the risk of losing the Punjab government once again,” the sources had said.

In a recent speech at a public rally in Chishtian, Punjab, ex-PM Imran Khan also claimed that a conspiracy was being hatched to topple the Punjab government, adding that ‘Mr X and Mr Y’ were also threatening him.

The fault lines in the party became visible when Shujaat refused to support Elahi during the Punjab chief minister’s election, saying that he would not back PTI chairperson’s candidate — even if it was his brother.

As a result, Elahi lost the election to PML-N leader Hamza Shahbaz by 10 votes as they were rejected following Shujaat’s letter to former deputy speaker Dost Mazari.

But Hamza’s victory was short-lived as the Supreme Court reinstated Elahi as the chief minister.

“It has become necessary to isolate Ch Shujaat to save the party from destruction,” said Senator Kamil Ali Agha while talking to the media after the CWC meeting in Lahore.

But yesterday, the PML-Q’s Central Executive Committee reposed confidence in the leadership of Shujaat and decided to send a show-cause notice to Senator Agha and others for holding an ‘illegal meeting’ in Lahore.

The party’s provincial presidents disassociated themselves from the Lahore meeting and condemned the illegal dismissal of Shujaat and Cheema. The meeting passed a resolution unanimously to express confidence in the leadership of Shujaat.

It was decided in the meeting that a legal team would be consulted to challenge the illegal move of the PML-Q Punjab chapter as it was not authorised to convene a meeting on August 10.