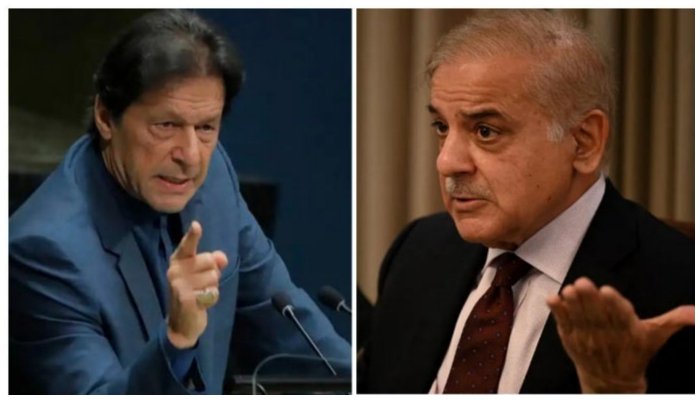 Prime Minister Shehbaz Sharif has “urged” PTI Chairman Imran Khan to file a defamation lawsuit against the Financial Times for publishing an indicating article in which the publication revealed that the PTI, back in 2013, received funding from foreign origin.

Taking to Twitter, PM Shehbaz wrote: “If he doesn’t [file a defamation case against FT] [and] I am sure he wouldn’t, it will prove one more time how brazenly he is lying [and] cheating the people of Pakistan.”

According to the FT article, Pakistani tycoon Arif Naqvi financed the party in 2013 by hosting a cricket tournament at his country estate in the Oxfordshire village of Wootton from 2010 to 2012.

The report stated that “Naqvi transferred three instalments directly to the PTI in 2013 adding up to a total of $2.12 millio”.

The guests were asked to pay between £2,000 and £2,500 each to attend, according to the UK publication. Quoting Naqvi, the report added that the money went to unspecified “philanthropic causes”.

“Funds poured into Wootton Cricket from companies and individuals, including at least £2 million from a United Arab Emirates government minister who is also a member of the Abu Dhabi royal family,” read the FT report.

It should be noted that political parties in Pakistan are not permitted to receive funding from foreign nationals and companies, but Wootton Cricket account details and emails seen by FT for the period between February 28 and May 30, 2013, revealed that both companies and foreign nationals, as well as Pakistanis, sent millions of dollars to Wootton Cricket after which funds were transferred to the PTI in Pakistan.

Earlier, the premier, in another tweet, had said that the story brought some “screaming facts” to the fore.

“Could it get more damning? The charade of self-proclaimed honesty [and] righteousness has been busted by the Financial Times story that details the flow of foreign funding into PTI bank accounts. Imran Niazi is a bunch of massive contradictions, lies [and] hypocrisy. Screaming facts!” he wrote.

In response, Khan, while replying to questions regarding Pakistani tycoon Arif Naqvi’s alleged involvement in the PTI’s finances, said that he had known Naqvi for the last 20-25 years. “He [Naqvi] was benefitting the country as he was the talented human who could have benefitted the country with his rise.

“Naqvi used to give us hefty amounts for the cancer hospital; he also held two fundraising dinners for PTI in 2012, arranged a match in London, summoned top businessmen in Dubai — money is collected like this around the world.”

He maintained that his party is the first party that collected money through political fundraising, “we have a database of 40,000 donors. Approximately Rs9 billion are collected every year for the cancer hospital. PPP and PML-N do not even have a database why aren’t they questioned regarding their funds?”

Khan further added that no money was taken through hidden means, and all transactions were held via proper banking channels.

Terming Naqvi’s case a “big tragedy”, Khan said that the case is still pending. “Nobody lost anything everybody received their due shares; however, there is some irregularity. Back in 2012, there were no allegations against Naqvi he was the bright star of Pakistan at that time,” he said, adding that all of this happened with “poor” Naqvi in 2019.

FIA to send another notice to Imran Khan