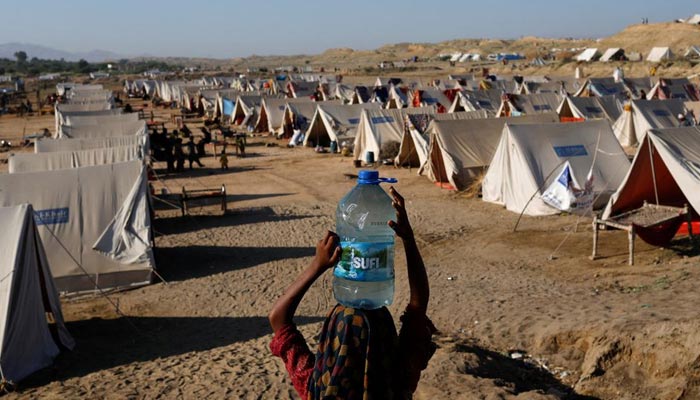 ISLAMABAD: Pakistan is out of money to spend on recovery from devastating floods, its climate change minister said on Tuesday, urging prompt international help at the UN launch of an aid appeal as funds needed by the country were ramped up five-fold.

The United Nations revised up its humanitarian aid appeal for Pakistan five-fold to $816 million from $160 million, as a surge of water-borne diseases and fear of growing hunger pose new dangers after weeks of unprecedented flooding linked to climate warming.

The meeting was told that the UN has received only $90 million so far out of the $160-million previous appeal for aid.

“We have no space to give our economy a stimulus package, which would create jobs, and provide people with the sustainable incomes they need,” the climate change minister, Sherry Rehman, told the conference in Geneva aimed at seeking aid for Pakistan.

She urged the developed world to accelerate funding for the ongoing domestic climate-linked disaster, terming it “the meta-climate event of a century.”

Pakistan has already dispersed cash handouts worth $264 million to 2.47 million people affected by the disaster, she added.

She said 7.9 million people have been displaced.

“We are gathered here to reboot your compassion simply because the numbers are too staggering to service for any one country alone,” she said.

The European Union (EU) scaled up its flood assistance to 30 million euros (6.7 billion Pakistani rupees), according to a statement after the EU commissioner for crises management, Janez Lenarčič, met Prime Minister Shehbaz Sharif in Islamabad.

Pakistan’s economic affairs minister Ayaz Sadiq told the gathering that it would take “years and years” for the country to rebuild and help rehabilitate millions of people whose homes were destroyed by the flooding.

The floods, caused by abnormal monsoon rains and glacial melt, have submerged huge swathes of the South Asian country and killed nearly 1,700 people, most of them women and children.

Hundreds of thousands of displaced people who are living in the open are being exposed to diseases like malaria, diarrhoea, dengue fever, severe skin and eyes infections, cholera, dog and snake bites, all of which are fast spreading amid stagnant floodwaters that officials say will take several months to recede.

The diseases have killed hundreds in addition to the 1,700 deaths from the flooding, and tens of thousands of them are treated daily at make-shift hospitals.

Tedros Adhanom Ghebreyesus, director general of the World Health Organisation (WHO), told the meeting Pakistan needed an urgent and robust response, supported by sustainable funding, to control the spread of outbreaks.

“We are on the verge of a public health disaster,” he said and added: “The water has stopped rising, but the danger has not.”

He said the WHO needed $115 million to meet the health emergency.

Approximately 10% of Pakistan’s health facilities have been damaged, leaving millions without access to health care, he said, adding that the stocks of essential medicines and medical supplies were limited or had been washed away.

The deluge has impacted 33 million people out of a population of 220 million, and caused damage the government estimates at $30 billion as crops, roads, livestock, bridges, houses, schools, and medical facilities were washed away.

The government and the United Nations have blamed climate change for the disaster.

Julien Harneis, the UN resident coordinator and humanitarian coordinator in Pakistan said the $816 million target for the appeal was “absolutely not enough”.

“We need all of these funds and we need it quickly,” he said.

Rehman said 8.2 million people were in urgent need of medicine, including 4% of the disaster-affected population that was pregnant, and export crops were almost all wiped out, pushing the country to import food.

“These are real people on the ground, whose eyes are still vacant from shock, who have overnight been turned into poster-children of extreme vulnerability, with futures that are entirely precarious,” she said.

“All we are saying is please don’t leave us alone.”