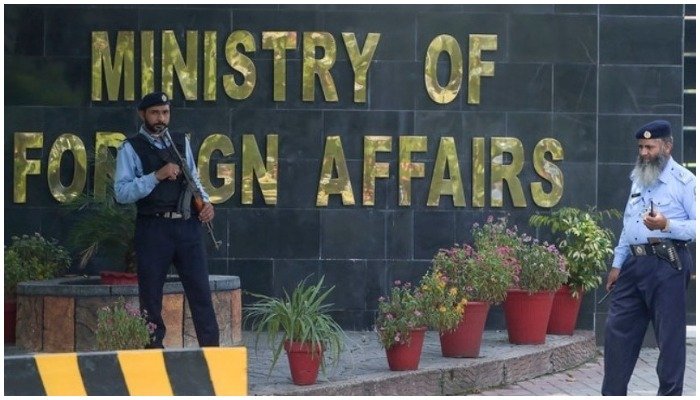 ISLAMABAD: Pakistan on Monday issued a “strong demarche” to India on the worsening situation in Indian Illegally Occupied Jammu and Kashmir (IIOJK) since India’s annexation of the disputed territory on August 5, 2019.

The Foreign Office, in a statement, said that the Indian Charge d’Affaires in Islamabad was called to the ministry and conveyed Pakistan’s “unequivocal rejection of India’s illegal and unilateral actions” of August 5, 2019, in IIOJK.

It reminded New Delhi that the action “breached international law, UN Charter and the 4th Geneva Convention as well as several resolutions of United Nations Security Council (UNSC) on the Jammu and Kashmir dispute”.

“A strong protest was registered over the series of illegitimate measures taken by Indian order to unilaterally alter the internationally recognised disputed status of the territory and to accentuate its brutal military occupation,” said the statement.

The Indian diplomat was told that three years since India’s August 5 action there was “no let-up in the strong-armed military siege of the occupied territory and the humanitarian and human rights situation continues to exacerbate”.

“Extrajudicial killings, detentions and arrests, fake cases and bogus trials under the ambit of draconian laws and a compromised judicial system have become a norm in the IIOJK,” said the FO.

The Indian diplomat was also informed of Pakistan’s categorical rejection of the report of the so-called “Delimitation Commission”.

“It was underscored that India cannot unilaterally alter the demographic composition of IIOJK under the garb of fake electoral reforms,” said the FO. The diplomat was also reminded of Pakistan’s consistent demand that India must reverse its illegal and unilateral actions of August 5 2019; immediately lift its inhuman military siege in IIOJK; stop its illegal measures to change the demographic structure of the occupied territory; cease extra-judicial killings of Kashmiri youth in fake encounters and cordon-and-search operations; release the illegally detained Kashmiri youth and political leadership; annul Hurriyat leader Yasin Malik’s fallacious life-sentence under fictitious charges and withdraw all other fabricated cases that have been mischievously spun around him; withdraw over 900,000 occupation troops from IIOJK, and let Kashmiris exercise their inalienable right to self-determination through a fair and impartial plebiscite under the auspices of the United Nations as enshrined in the relevant UN Security Council Resolutions.

“Pakistan also once again calls upon the international community, international human rights organisations and particularly the United Nations and its human rights machinery to take cognisance of the dire human rights and humanitarian situation in IIOJK, hold India accountable for its reprehensible conduct, and ensure a just resolution of the Jammu and Kashmir dispute in line with the relevant UN Security Council resolutions and the wishes of the Kashmiri people,” concluded the statement.