Pakistan ‘happy to play positive role’ to bridge differences between US, China: PM 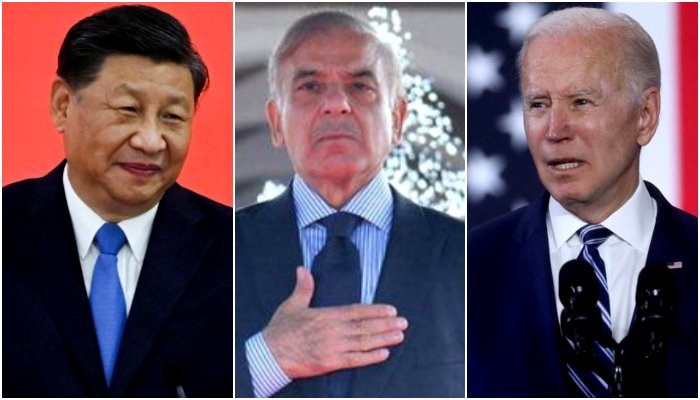 Prime Minister Shehbaz Sharif has offered Pakistan’s services as a mediator to bring together US and China as it did decades ago.

In an interview with Newsweek, published on Monday, the prime minister said: “If China and the US so desire, Pakistan would be happy to play a positive role to bridge their differences, as we had done in the past.”

The interview revolved around national, regional and global issues and focused in particular on the role Pakistan could play in “preventing the world from sliding into an ever deeper set of crises”, as put by the publication.

PM Shehbaz characterised Pakistan’s foreign policy as one of “friendliness and goodwill towards all the nations of the world”.

“Pakistan has traditionally maintained good relations with China and the United States. Historically, it was Pakistan that acted as a bridge in opening up the relationship between the United States and the Peoples’ Republic of China,” he said.

The premier said that Pakistan has always underscored the need to avoid a confrontational approach. “Bloc politics and any drift towards cold war will not produce any positive results, and in fact would be counterproductive for growth and stability,” he stressed.

“Pakistan strongly believes that inter-state relations should be based on mutual respect and peaceful resolution of disputes by upholding the principles of the UN charter and international law,” he added.

To a question on what it could mean for Pakistan and the rest of the world, if nations were asked to choose sides, especially given the close ties Pakistan and China enjoy, PM Shehbaz said that while the relationship may be “very special”, Pakistan and the US “have also maintained a longstanding historic bilateral relationship which covers all issues of mutual interest”.

“The world can ill-afford descent into another era of Cold War or bloc politics. I believe polarisation would have serious consequences for the global economy afflicted by the impacts of the COVID-19 pandemic and the Ukraine crisis,” the premier told Newsweek.

He said developing countries, like Pakistan, are “already suffering from external shocks to their socio-economic well-being, and do not desire aggravation of these challenges induced by major power rivalry”.

On the subject of relations with the US and their planned trajectory, PM Shehbaz said that Pakistan has instituted dialogues in the areas of health, energy, climate, investment and trade.

“These dialogues are playing an important role in strengthening our bilateral ties. Most recently, we held the Health Dialogue with the US, which will help facilitate more bilateral cooperation in the health sector. We also hope for the Trade and Investment Framework Agreement (TIFA) Ministerial level meeting this year,” he said.

He urged US companies to “invest in Pakistan’s lucrative market and enhance commercial ties, particularly in its growing IT sector”.

“There is a strong Pakistani diaspora in the US that is acting as a bridge to deepen the ties between our two countries and the people,” he added.

Speaking of one year of Taliban rule in Afghanistan and what can be done to support the Afghan people amid a precarious humanitarian and economic situation, the premier said: “Our message to the international community would be to remain engaged, continue to assist the interim government in key social and economic areas, and unfreeze Afghanistan’s financial assets to help build a sustainable economy.”

He said that in the meanwhile, Pakistan will “continue to impress upon the interim Afghan government the importance of taking demonstrable actions on its commitments including those relating to inclusivity, respect for human rights of all Afghans, including girls’ education, and effective counter-terrorism action”.

PM Shehbaz also spoke of taking over from his predecessor, Imran Khan, saying that under the current regime, if viewed in terms of the vote cast in the 2018 elections, “the political parties that are part of the coalition government represent 70 percent of the electorate”.

“The present government is truly national in nature,” he remarked.

On the road map ahead, he said that the coalition government is “working on an agreed-upon national agenda of economic reform and stabilisation”, which he termed the country’s “topmost priority”.

“We are also focusing on making governance efficient and service-oriented, besides improving Pakistan’s relations with friendly countries on the basis of our mutual interests,” he added.

The premier laid emphasis on the need to understand that Pakistan is a “young democracy”. “We need time to evolve and mature as a democratic polity. The political evolution always comes with a cost,” he explained.

“Honestly speaking, for democracy to function effectively, the political parties that come to power will have to improve their delivery. A political system can only be strengthened and strike deep roots when it is owned by the people at large, which in turn is possible through efficient public service delivery. Performance in office alone can provide longevity to the public office holders,” he said.

He called for political parties to agree to the “minimum rules of the game in which the welfare of the people remains paramount”.