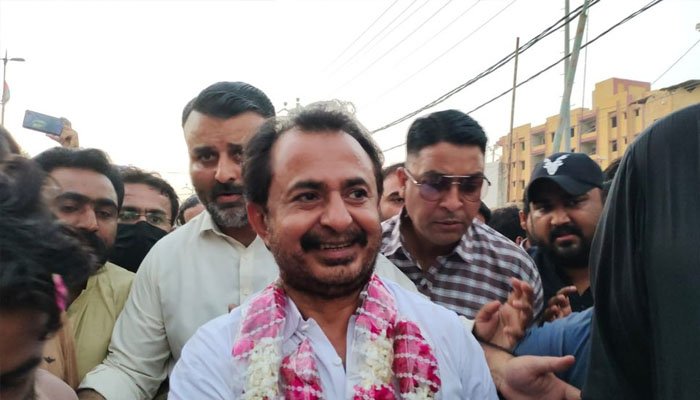 Leader of the Opposition in Sindh Assembly and PTI leader Haleem Adil Sheikh has been released from Central Jail, Karachi after a court approved his bail plea.

The PTI leader was arrested by the Anti-Corruption Establishment, Sindh (ACE) in a property transfer case on July 27 from Jamshoro.

Sheikh was booked by the Anti-Encroachment Force (AEF) on a charge of illegally occupying 25 acres of state land in Scheme 33. He was arrested in the case from outside the Karachi central prison minutes after he was released on bail in a terrorism case on August 29.

PTI workers and supporters welcomed Sheikh outside the jail premises.

As soon as he walked out, the PTI supporters and workers, including Sheikh himself started chanting slogans in favour of party chairman Imran Khan.

The ACE had arrested Sheikh on July 6 from Lahore, but later, the Lahore High Court (LHC) ruled the detention of the opposition leader in the Sindh Assembly to be “unlawful” and granted him protective bail.

PTI leader Haleem Adil Sheikh also alleged that he was tortured, and strangled at a police station.

A video of Sheikh from a hearing had surfaced on Twitter where he was seen alleging that he was tortured and strangled in jail.

“They didn’t give me a single thing to eat for two days. I am not a terrorist but was isolated in the terrorists’ cell for 10 days,” Sheikh had said in the video while showing a bruise on his leg.

He had said that he had a rod in his leg due to which he had a puss infection, but was not being given medical treatment.