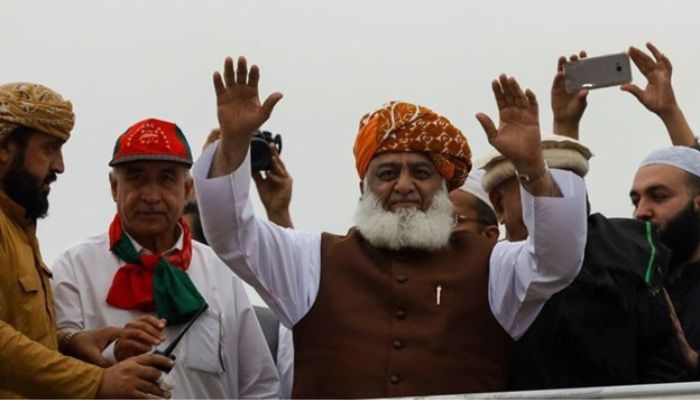 The JUI-F chief claimed to the media, after attending a jirga of tribal elders from North Waziristan district, that the PTI destroyed the country’s new economic pillars. China’s investment was one such pillar, he said, adding that CPEC was more than just a road, but a full economic package.

“Gwadar is the second largest deep-sea port in Asia. Some countries were feeling a threat from Gwadar. It would have been the most useful port for trade. The PTI inflicted serious damages on the project,” he added.

Fazl said that the Financial Times article exposed the real face of PTI. The money given to Abraaj Group also included a huge chunk from a Gulf state, which was aimed at sinking the Gwadar Port project, he alleged.

“Now we can see that the depth of the sea has reduced to just 11 feet,” he claimed.

Fazl said the PDM, by coming to power, actually accepted the challenge it faced. He said the government would give a detailed briefing to the PDM over the economic situation of the country on Tuesday and Wednesday and ministers had been called to the meeting for the purpose. After that, a strategy would be devised for economic stability, he added.

He urged his party workers to run an effective campaign for the by-elections so that the PTI could not enter the parliament again. The JUIF activists should consider all the candidates of the PDM component parties as a candidate of their own party and run a strong election campaign in their support, he added.

He brushed aside the reports about alleged differences among the PDM component parties.

“Look, the PDM leaders met for the first time after coming to power. They must have expressed their opinions during the meeting. But those opinions can’t be called differences. The meeting unanimously decided to hold elections on time and the government will complete its tenure,” he added.

Fazl said the PTI government had pushed the country to a quagmire and it was not an easy job to get it out of the mess.

“They have made such agreements that I can show you the statements of responsible people of the PTI, who said that they have sold out the country,” the Maulana remarked.

The PTI leaders used to say during the last days of their rule that they had mortgaged the country with the International Monetary Fund (IMF), he claimed.

“Had we not taken the government and ousted PTI from the power corridors, the country would have split into pieces,” he claimed.

The JUI-F chief suggested that the government should work out short-term projects for the economic revival and well-being of people. “For long-term projects, we should wait for the next government,” he added.

Fazl expressed serious concerns over the target killings in North Waziristan. He said that a number of JUI-F leaders, social workers and others had been killed so far. He said there was no writ of enforcers in the southern districts and the target killers were roaming free.

He said the sit-in of the Uthmanzai tribe was still in progress. “I would take up the issue with the prime minister in my meeting with him this week,” he said.

The JUI-F chief said that gas had been explored in North Waziristan, and urged the government to provide gas to the local population first and the local elders should be made a part of the survey teams for exploration of natural gas.