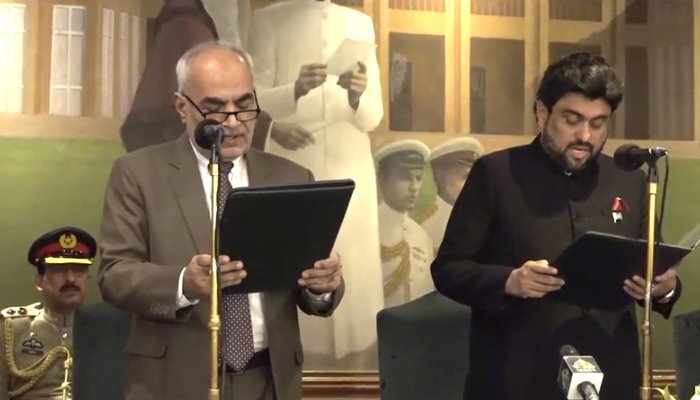 KARACHI: MQM-P’s Kamran Tessori was sworn in as Sindh’s 34th governor Monday after President Arif Alvi approved his appointment under Article 101 (1) of the Constitution.

Speaking after the ceremony, Tessori said that he would try to fulfil the duties that he has been entrusted with.

“I will work in harmony with everyone to fulfil my obligations. With regards to the problems of the province, I will raise my voice at every relevant forum,” he added.

The office of Governor Sindh was lying vacant after the resignation of former governor Imran Ismail who stepped down from the post after Imran Khan’s ouster from the PM Office in April.

Tessori has recently been re-inducted into the MQM-P. The move stirred controversy as many within the party had expressed their reservations.

On September 9, MQM-P in a meeting chaired by party’s convener Khalid Maqbool Siddiqui, decided to induct Tessori back into the party as the deputy convener.

The MQM-P coordination committee removed Sattar from the convener’s post as the latter insisted on awarding the party ticket to Tessori in a by-election.

Later, Sattar formed another faction of the party called the MQM Restoration Committee.

Why was Tessori nominated?

Senior MQM-P leader Nasreen Jalil was initially considered for the office and a summary was also moved for her appointment as governor but despite the lapse of almost five months, the president didn’t approve her nomination.

In a statement issued after the president’s approval, an MQM-P spokesperson said that Tessori will play the role of bridge between Sindh and the Centre.

In this regard, the spokesperson said that since the establishment of the current government, governor Sindh’s post was lying vacant.

“MQM-P had given five names in the first phase but no progress could be made on these names. Then the names of Kamran Tessori and Abdul Waseem were sent for approval and the president gave his assent to Tessori’s nomination.”

According to the spokesman, Tessori will play his role in removing the deprivations of the citizens of Sindh.