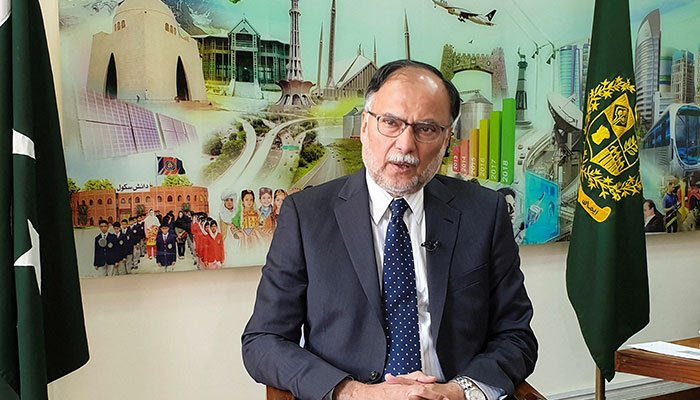 Imran Khan committed a serious crime if he took the cypher with him, said Ahsan Iqbal, federal minister for planning, development, and special initiatives.

The copy of the cypher which was meant for the Prime Minister of Pakistan is missing from the record of the PM House and it is a serious crime, he told Shahzeb Khanzada in his current affairs programme ‘Aaj Shahzeb Khanzada Kay Sath’ on Friday.

The crime is so serious that the FBI, in recent past, raided the house of former US president Donald Trump because it was reported that he had taken national documents with him, he noted.

“The cypher has very strict protocols. It is not possible for everyone to see it. Even the officials of the PM House can’t witness it.”

He slammed the former prime minister, Imran Khan, for leveraging the cypher issue and worsening the country’s relations with the US. He said Imran put the entire diplomacy at stake.

He said that, according to the information, the secretary to the prime minister had given the cypher to the former prime minister, Imran Khan, but no trace of it was found, later on.

“Either Imran Khan has probably taken the cypher away with him or the investigations will reveal what happened to it,” he said.

The programme host queried, “How are you so sure that the cypher was lost or stolen during Imran’s era? It might have disappeared over the past four to five months. However, the minister was non-committal and went on repeating the Donald Trump incident, saying his house was raided because he took some national sensitive documents from the White House.

The minister said the cypher’s trail from the Foreign Office to the PM House exists as it was received at the PM House. The then-secretary to the PM, who held it, was reported to have said he delivered it to the [former] PM, remarked the minister.

So, if Imran Khan removed the cypher from the PM House, he had committed a national crime, he stressed. “Or, if he [Imran] has done away with it or hidden it, it is again a crime,” he said.

“There is no precedent for anyone to have harmed the state so much for the sake of politics as Imran Khan has,” he said. “Imran Khan made such a conspiracy that hurt the interests of the country.”

Ahsan Iqbal also said that the National Security Committee (NSC) has formed a high-powered investigation committee on the issue of audio leaks. He claimed that the problem of phone call eavesdropping dates back to Imran Khan’s time and that the government has created foolproof security procedures to make sure that this never happens again.

The minister responded when asked if the government would call Imran Khan to account for the audio leaks, saying that the intelligence and security agencies have been asked to look into the matter.