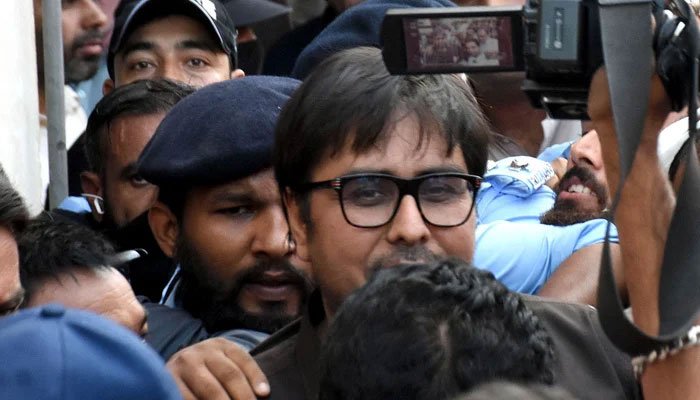 A district and sessions court in Islamabad granted on Monday a two-day physical remand of senior PTI leader Shahbaz Gill in a sedition case filed against him, after reviewing his medical report.

PTI Chairman Imran Khan’s chief of staff, Gill was presented before the court earlier shortly after being discharged from the Pakistan Institute of Medical Sciences (PIMS) today.

Gill was taken into custody on August 9 from Banigala Chowk over charges of inciting mutiny among public against the ranks and files of Pakistan Army by making some remarks during a TV programme.

The PTI contends that its leader was “tortured” while in incarceration and was not medically fit to be sent into physical remand while the police insist on him being given into its custody for further investigation.

The court had deemed the condition of Gill “not okay” and ordered to keep him at the Pakistan Institute of Medical Sciences (PIMS) for a reassessment of his health till today.

Upon resumption of the hearing, the court inquired about the order of the Islamabad High Court (IHC) over PTI’s plea against an extension in Gill’s physical remand.

“Where is IHC’s order? I will decide after looking at it,” the judge said.

At this, Gill’s lawyer informed the court that the high court has reserved its verdict today. He requested the court to adjourn the hearing till 2pm to wait for the IHC verdict.

After this, the court directed the police to take Gill from court and adjourned the hearing till 1:30pm.

Ahead of the resumption of the hearing, sources said that Gill was complaining about chest pain but that he was discharged from PIMS hospital.

They quoted doctors as saying that Gill is completely fine and he doesn’t have breathing issues either.

It may be noted that Gill had been complaining of having breathing issues and has undergone several medical tests and multiple examinations.

Later, the police left for the court with Shahbaz Gill in a car with tinted glass.

Meanwhile, irrelevant people were barred from entering the courtroom.