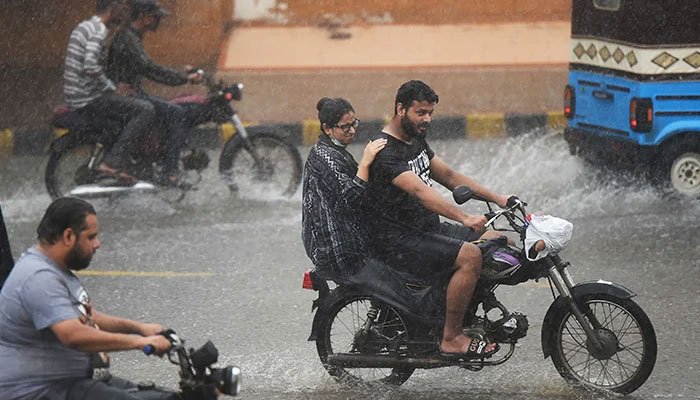 KARACHI: Intermittent monsoon rains have continued to batter parts of Karachi since last night, submerging several low-lying areas of the port city amid a forecast of more heavy showers in the evening.

Pakistan Meteorological Department (PMD) chief meteorologist Sardar Sarfaraz had said the port city is expected to receive 130 to 150mm of rainfall under the influence of a new spell of the monsoon system that entered Sindh from Rajasthan.

Heavy rainfall hit most parts of the city after 10:30am.

‘Intensity of rain to increase’

Talking to Geo News, chief meteorologist Sarfaraz said that the intensity of the rain is expected to increase in the evening. He maintained that most parts of the port city are likely to receive heavy rainfall in the evening/night.

“The intermittent showers are expected to continue till 12pm tomorrow,” forecast Sardar Sarfaraz, adding that the current spell of monsoon rain is likely to continue for the next three days.

He warned that the heavy falls may cause flooding and water logging in the city’s low-lying areas.

The Met Office said that strong monsoon currents are penetrating upper, central and southern parts of the country.