Imran Khan’s relatives are not in Round Table Conference image 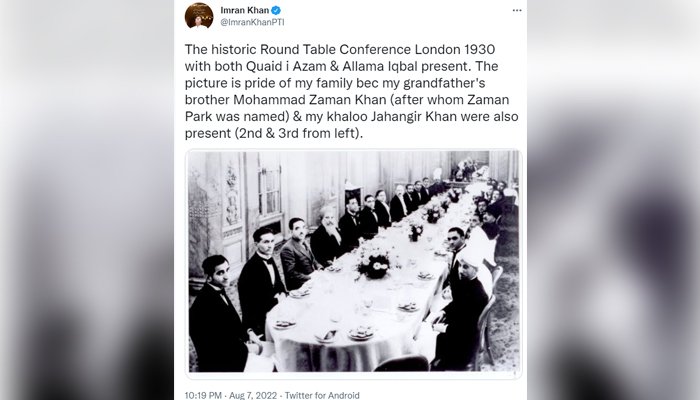 Social media users and commentators are calling out former premier Imran Khan for misrepresenting the truth after he shared a photograph of the 1930 Round Table Conference — purportedly depicting his family members.

Khan posted the photograph on Sunday evening with the caption: “The historic Round Table Conference London 1930 with both Quaid i Azam & Allama Iqbal present.”

“The picture is pride of my family because my grandfather’s brother Mohammad Zaman Khan (after whom Zaman Park was named) and my khaloo Jahangir Khan were also present (second and third from left).”

Twitter user who goes by the name Wahid wrote that “Jehangir Khan,” who Imran Khan claimed was his maternal uncle, was in fact Cowsaji Jehangir (2nd Baronet), son of Jehangir Readymoney.

He was among the prominent voices of the Parsi Central Association. Jehangir married Lady Hirabai Seth Hormusji Wadia, founder of Bombay Parsi panchayet funds. She had no relations with Hassan Khan Niazi.

Bano married General Wajid Ali Burki, and Mubarak married Jehangir Khan, who was a cricketer. He played for India during the British Raj. He is remembered for an incident when his ball struck and killed a sparrow during a match at Lord’s Cricket Ground.

The list by UK’s Open University of the delegates at the Roundtable Conference does not mention the presence of any “Mohammad Zaman Khan” or any variation of this name.

This is not the first time Khan has shared this photograph with incorrect information.

Earlier, he shared the same image in 2018 on Independence Day, mentioning that Mohammad Ali Jinnah and Allama Iqbal were sitting next to his relatives.