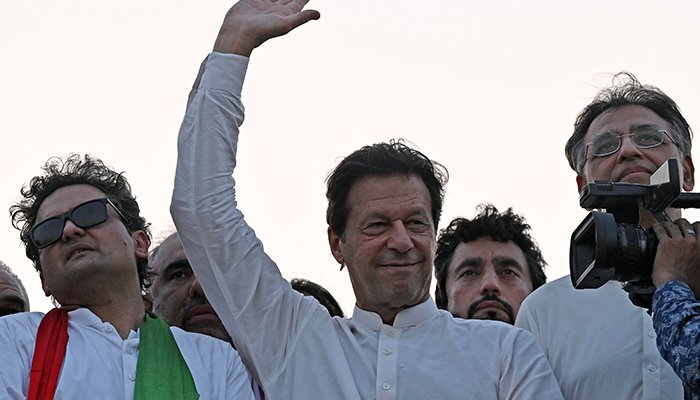 The nomination papers were filed for NA-246, NA-237, and NA-239 through PTI leaders as August 13 (today) was the last date for submitting the papers.

Khan has decided to contest from all the nine constituencies that fell vacant after the Election Commission of Pakistan (ECP) de-notified 11 MNAs of the PTI — two on reserved seats and nine on general.

Khan’s decision to contest from all nine constituencies was taken after PTI’s major victory in last month’s Punjab by-polls, wherein the party won 15 out of the 20 seats up for grabs.

Once Khan files his nomination papers from all the nine constituencies, it will be a record. The ex-premier also set a record in the previous 2018 general elections when he won the polls in five constituencies from across the country.

The ECP last week issued the schedule for by-elections on the nine NA seats and fixed September 25 as the date for polling.

The ECP sought names from the PTI on the vacant reserved seats after two women members resigned. The nominations for the reserved women’s seats can be submitted from August 10 to 13.

As per the schedule, the list of nominees will be released on August 14, scrutiny will take place on August 17, appeals against the returning officer’s decision can be submitted by August 20, and a decision will be taken by the appellate tribunal on August 25.

The revised list of candidates will be released on August 26, after which candidates can withdraw their nomination papers till August 27.

Moreover, the final list of candidates will be released by August 29, and on the same day, election symbols will also be allotted.

In case the PTI chairman wins from all constituencies, he will have to keep one and resign from the rest, and this process will cost the national exchequer millions of rupees.

According to sources in the ECP, the minimum expenditure incurred in an election in one constituency is around Rs50-100 million, while in sensitive and far-flung areas the cost is approximately around Rs100 million.

Consequently, sources added that in order to conduct elections in nine constituencies, it is estimated that Rs500-900 million will be needed as expenses include printing and purchase of material used such as ballot papers, forms bags, etc.

If Khan wins the elections, in any case, by-elections will once again be held in all nine constituencies which will lead to an expenditure of nearly Rs500-900 million.