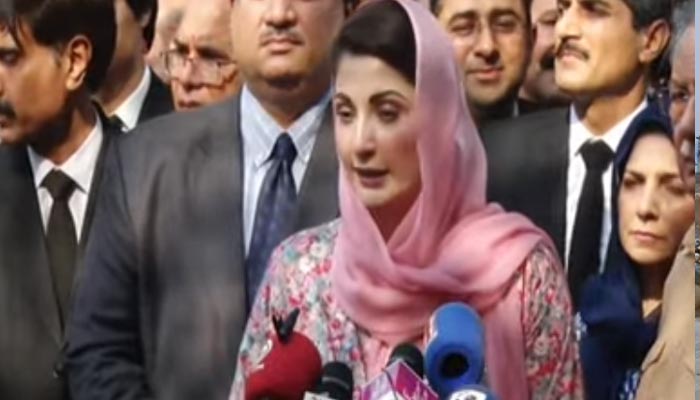 ISLAMABAD: In yet another scathing flak, PML-N Vice President Maryam Nawaz on Tuesday said PTI Chairman Imran Khan, who had accused the US of co-conspiring to overthrow his government, was now “lobbying with the Americans to get himself a political bailout”, Geo.tv reported.

“Today, he is trying to convince the US to broker a normalisation deal between him (Khan) and them (the establishment),” she said while talking to the media in the federal capital.

Maryam dared Khan to name the people he referred to as X, Y, and Z, which he often refers to during his speeches.

“How does challenging them in the daylight and then kissing their feet in the night work?” she questioned.

She said the PTI chairman must have the “moral courage to come clean about who he had been secretly meeting in the dark of the night.”

The PML-N vice president went on to say that Khan was not happy over his party leaders’ ongoing engagements with the establishment. “We have given the names as well as the proof.”

On the accusation of threatening phone calls, Maryam said Khan, who used to have his trolls harass others over the phone, was now getting a taste of his own medicine.

“We also received such threatening calls ourselves, but our revolution did not die out in two months.”

Maryam said Khan’s revolution was “too scared of Interior Minister Rana Sanaullah” to take to the streets, adding it was nature’s way that no matter how long it might take, the truth would always see the light.

She said her father and the party supremo Nawaz Sharif would soon return to Pakistan and would be cleared in the illegal cases he was facing for crimes never committed.

“Khan is not the blue-eyed boy. They are just using him and he is saying if he doesn’t get an army chief of his choice, then he is going to smear their faces,” she said while resuming her flak.

Maryam also lamented the skyrocketing inflation but pinned it on the former PTI government’s economic mismanagement.

Only PM will appoint next army chief: Fazl

Meanwhile, JUI-F chief Maulana Fazl-ur-Rehman has said no amount of shouting himself hoarse would get Imran Khan the power to pick the new chief of the army staff (COAS).

“Only the prime minister will appoint the next chief of the army staff in the light of the Constitution,” said the leader of the Pakistan Democratic Movement (PDM).

“Who does he think he is to stop the government from appointing the army chief?” Fazl questioned.

The PDM leader said Khan’s desperate attempts to make this matter controversial clearly indicate that his talks, if any, with them (the establishment) have bombed.

“I am surprised as to why the government is giving so much rope to an imported thief,” he said.