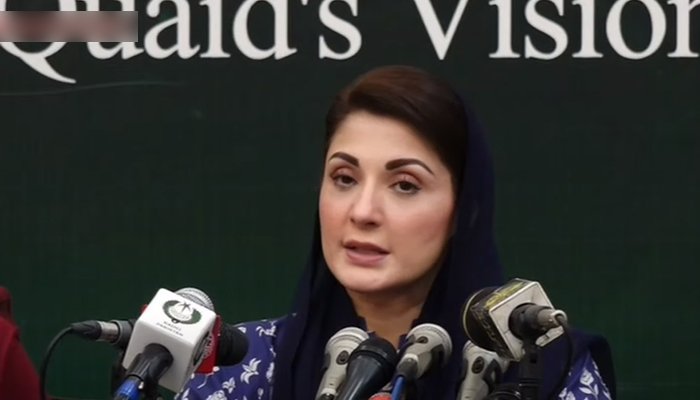 In a press conference after receiving her passport following the passage of three years in line with the Lahore High Court’s orders, the PML-N vice president spoke at length about her legal battles, Khan’s vendetta against her family, the court’s decision to let him go, and other pressing political matters.

Maryam told the judiciary that it should not be lenient with a person like Khan who thinks like “satan” and his only job is to blame people and launch smear campaigns.

“For years, he has been doing this. And when he does [something illegal] and sees that action will be taken against him, he apologises,” Maryam said about Khan who recently escaped being charged for contempt of court.

The PML-N leader said Khan went to the chambers of Additional District and Sessions Judge Zeba Chaudhry to apologise as he was aware that if he does not do it, then he can be disqualified.

“Was Zeba asked whether she wants to forgive him or not? Do you (courts) know what kind of precedent are you setting? Now, anyone can abuse and threaten any woman in jalsas,” she said.

Maryam added that since Khan has been forgiven, the contempt cases against PML-N leaders Talal Chaudhry, Daniyal Aziz, and Nehal Hashmi should also be disposed of.

“This devil (Khan) whom you have forgiven will do this again. He has been emboldened as he knows that now no matter what he does, he can seek forgiveness,” she said.

Referring to Khan’s recent statement where he mentioned “misplacing” the US cypher allegedly linked to his ouster, Maryam said that she is “at a loss of words” at the PTI chairman’s carelessness.

“This wasn’t a record of a diamond ring that you misplaced or the record of the dollars that you took in the foreign funding case. It was Pakistan’s property,” she said.

Maryam said that since Pakistan’s inception, no cypher had been misplaced. The PML-N leader added that a more serious crime than misplacing the cypher was changing the minutes of the meeting.

“There was no mention of a conspiracy, and then, you built a conspiracy [by manipulating the minutes of the meeting],” the PML-N vice president said.

Maryam said that after Khan’s stunt, the Ministry of Foreign Affairs has told officials that the international world has refused to send cyphers to Pakistan, fearing that it might be turned into a conspiracy.

The PML-N leader castigated Khan for dissolving the parliament on the basis of “forged” minutes of the meeting.

In response to a question, Maryam said that Nawaz will himself decide about his return to Pakistan. “The way for his return is clear. All we have to do is submit an application in the court.”

The PML-N leader also said that had received her passport and would soon visit her father in London — whom she hasn’t seen in person for the last three years.

Talking about Finance Minister Ishaq Dar’s return to Pakistan, the PML-N leader said that the PTI is not happy with him coming back as he will now “improve” the economy.

“Dar’s return was a slap on their face. Dar has led the country out of many economic crises,” she said.

‘Why was a false case built against me?’

At the outset of the press conference, the PML-N leader thanked everyone — including the media and her legal team — for helping her in the cases lodged against her.

“I am happy today that I have received my passport, but I would like to ask as to why I was deprived of my fundamental right for three years,” the PML-N leader said.

Maryam said that her passport was confiscated when the “foreign-funded fitna (anarchist)” Imran Khan was in power and he was afraid that her jalsas would lead to his ouster.

“My jalsas were going on till 3am at night in support of Mian Nawaz Sharif,” she said.

Maryam said the National Accountability Bureau (NAB) arrested her — while she was visiting her father in jail — under the pretext of investigation.

“They kept me in the NABpremises unlawfully as there was no space to detain women at NAB; they evacuated their daycare centre and held me there,” she said.

“They held me there for 57 days,” Maryam noted, adding that during the probe, the investigators would ask her questions totally unrelated to the case — including which Paulo Coelho book was she reading and who sets the menu for her family.

“They did not have any case against me; they confiscated my passport and did not return it for three years,” she said.

Maryam reminded the nation that she wasn’t sentenced to jail in the Calibri font (Panama Papers) case — which stirred up controversies and legal battles eventually leading to her father’s ouster as prime minister.

“The question is: why was a false case built against me?”