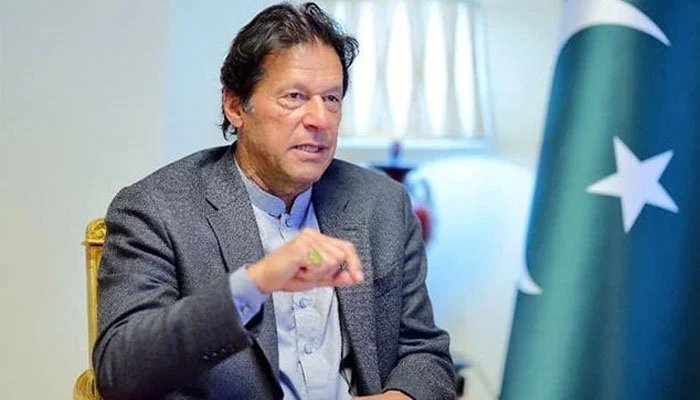 PTI chairman Imran Khan has strongly condemned the arrest of Leader of the Opposition in Sindh Assembly Haleem Adil Sheikh a day after he was held by the province’s Anti-Corruption Establishment (ACE).

ACE Sindh had arrested the PTI leader in a property transfer case on Wednesday when he went to the agency’s office in Jamshoro to record his statement.

Taking to Twitter, Imran Khan on Thursday termed Sheikh’s arrest as “pure fascism” that reflects the coalition leaders’ approach to eliminate those they “cannot buy.”

“Strongly condemn persecution and arrest of Sindh Opposition leader Haleem Adil Sheikh by Sindh govt. This is pure fascism, reflecting the Zardari-Sharif mafia’s approach of eliminating those they cannot purchase and it is absolutely unacceptable in any democracy,” the former premier wrote.

This is the second time this month that ACE has arrested Sheikh in the case.

ACE had arrested Sheikh on July 6 from Lahore, but later, the Lahore High Court (LHC) ruled the detention of the PTI leader to be “unlawful” and granted him protective bail.

“Haleem Adil Sheikh has been put in jail in a fake case a 10th time,” Fawad said.

Earlier, Haleem also appeared before the provincial anti-corruption court to defend the allegations of raising a loan from a bank on the basis of fake property documents.

During the hearing, the court inquired about the number of accused in the case.

At this, the investigation officer said that there is only one accused.

Haleem’s counsel, Advocate Javed Altaf maintained that Haleem is the leader of Opposition in Sindh Assembly.

The argument drew the court’s ire as the judge remarked that he knows what the counsel told but Haleem didn’t appear before the court despite being notified.

The prosecution maintained that Haleem did not appear on purpose to record his statement. He said that the disputed land had been acquired for setting up a poultry farm but it was used for another purpose.

Responding to the arguments, Advocate Altaf maintained that the case is 33 years old.

Later, the court reserved the verdict over petition for Haleem’s physical remand.

The verdict was scheduled to be announced after 2:30pm but hasn’t been announced yet.