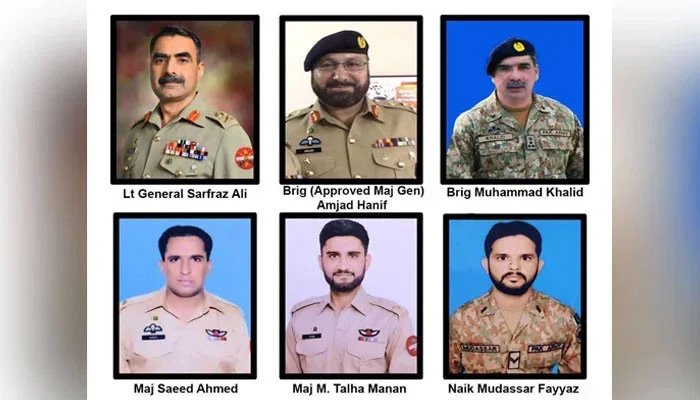 ISLAMABAD: The federal government has expanded the scope of investigations into the smear campaign launched against the military officers who were martyred in the Lasbela helicopter crash, including the officials from the Inter-Services Intelligence (ISI) and the Intelligence Bureau (IB) in a six-member inquiry committee established to ascertain the facts.

The Pakistan Army helicopter carrying a senior commander and five others crashed on a mountain during a flood relief operation last Monday and all on board embraced martyrdom.

Following the incident, a smear campaign started on social media which targeted the martyred military officers and included hashtags against the armed forces.

Among those martyred in the unfortunate incident were Lieutenant General Sarfaraz, Brigadier Amjad Hanif, whose name was cleared for promotion as Major General, Brigadier Muhammad Khalid, both pilots Major Saeed Ahmed and Major Talha Manan, and Naik Mudassar Fayyaz.

“The purpose behind the constitution of the joint investigation team is to net the real people active behind the scene,” said the sources.

The second notification issued on August 8 announced the inclusion of intelligence officials, including Deputy Director Waqar Nisar of the IB, in the JIT.

The JIT meeting will be held at the FIA Headquarters, Islamabad on August 10 (tomorrow).

The committee will take meaningful and effective measures to arrest those behind the poisonous propaganda against the martyred military officers. There is a strong possibility that the director general FIA will also participate in the meeting, but the final decision has not been taken in this regard.

Prime Minister Shehbaz Sharif had called the campaign “horrifying” and said it reflected that the minds of young Pakistanis were being poisoned.

He urged the nation to unite against those spreading negative propaganda and rumours. “Insensitive behaviour is unacceptable and should be condemned on every platform.”

The army’s media wing also rejected the ‘regretful’ social media trends, saying they had caused anguish among the families of those who had died as well as in the army as an institution.