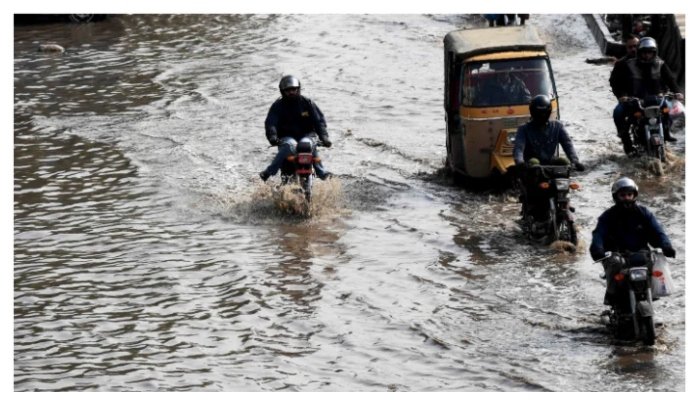 KARACHI: Four people, including a father-daughter duo, were electrocuted, while four others drowned due to urban flooding in Karachi on Monday as heavy rains continue to pound the city.

One of the tragic incidents took place at a residential apartments’ premises on Al-Falah Road in Lyari’s Bihar Colony area when a man and his daughter were electrocuted. The rescue teams rushed to the site of the incident and shifted the victims to Civil Hospital, where they were pronounced dead.

The deceased were identified as Rehman Usman, 35, and 10-year-old Hifza.

Quoting initial reports, police said the incident occurred when Hifza suffered shocks from an electric board in the flat and her father was electrocuted as well as he attempted to save her, The News reported.

In another incident in Lyari, an elderly man identified as 60-year-old Salamat Rakha died of electrocution within the limits of the Kalakot police station. The body was shifted to the RPCH.

The deceased was a resident of the Baghdadi area of Lyari and he was electrocuted through an electricity pole.

Moreover, a dyeing factory worker, Waqar, 25, son of Deedar, died of electrocution at a company located near Habib Bank Chowrangi within the jurisdiction of the SITE A Section police station. The body was shifted to Abbasi Shaheed Hospital for an autopsy.

Meanwhile, a 21-year-old youth, Amir, son of Mumtaz, drowned in the Lyari River near Sohrab Goth within the limits of the Federal B Industrial Area police station.

Upon receiving the information, rescue workers and police reached the site and started a search operation but could not retrieve the body.

Quoting family members and friends of the victim, police said the youth’s friends had challenged him to cross the river from one side to another but he lost control while trying to complete the challenge and drowned.

A video of the incident also went viral on the internet showing how the victim drowned. The search operation was halted due to darkness and it will resume today (Tuesday).

A six-year-old boy, Ahmed Ali, son of Hassan, drowned in a pond in the Surjani Town area. Rescue workers retrieved the body and transported it to Abbasi Shaheed Hospital. Police said the boy was bathing in a water-filled pothole near his house when he drowned.

In another incident, a teenage girl identified as 15-year-old Sakina, daughter of Ali Murad, drowned in a pothole near the Northern Bypass within the limits of the Mochko police station. She was a resident of the same area.

Separately, a teenage boy identified as 17-year-old Bilal, son of Ataur Rehman, drowned in the rainwater in the Clifton area. The body was shifted to the Civil Hospital, Karachi. The deceased teenager was a resident of Keamari.

‘Living in a jungle’

Followed by heavy rain on Sunday in Karachi, more showers on Monday once again wreaked havoc on different parts of the city, incurring losses worth millions of rupees to business owners and ordinary citizens.

“We can’t go out to get petrol for the generator. Even the gas cylinders are empty now. Living in Karachi’s posh area is like living in a jungle with no civic amenities at all,” said a resident Sidra Qureshi.

The heavy rain caused immense hardships for patients and other people who had to step out of their homes despite the announcement of a public holiday on Monday.

Amid criticism following the devastating situation in Karachi after the first spell of monsoon downpour, even though the city had received less rain than last year, the city administration acted swiftly this time round, using more manpower and deploying more resources to clear the key road links after hours-long efforts.

II Chundrigar Road, Saddar, old city areas, Zainab Market, Lyari and the adjoining areas were completely flooded. After rainwater receded from the Urdu Bazaar, the rubbish and sludge made it impossible for anyone to enter the streets.

Jahangir Road, which has been under construction since ages, was completely inundated with sewage-mixed rainwater. The Malir River flooded with rainwater and subsequently, the Korangi Crossing was once again closed for traffic. The adjoining Qayyumabad was also partially blocked, causing a disruption in traffic movement for hours.

The Malir Bridge that connects Quaidabad to the Malir 15 area was also partially broken after potholes developed in it, causing a traffic jam for hours.

Nagan Chowrangi, Saleem Centre, Power House Chowrangi, Shadman Town, Sakhi Hassan, Five Star and KDA Chowrangi were also flooded. Even after rainwater was drained, the roads were marred by huge ditches. The 4K roundabout area turned into a river with more than knee-deep water, rendering it completely inaccessible for any kind of vehicle.

A flood-like situation was witnessed in Surjani Town. After rainwater entered Yusuf Goth and Bismillah Town, law enforcement agencies with the help of the district administration rescued its residents.

Karachi Administrator Murtaza Wahab visited the stormwater drains in the Shaheen Complex and provincial assembly area. He said the nullahs were still flowing at full capacity.

Meanwhile, a senior Karachi Water & Sewerage Board official admitted that the situation in the city would take time to normalise.

“Rainwater is almost drained out from all major roads but it’s the overflowed sewerage lines in residential areas that have become a challenge, for which we have deployed more resources and hired temporary staff.”

Many areas were deprived of electricity as soon as rain started. Until the filing of this report, power was yet to be restored to some parts of Gulshan-e-Hadeed, Malir, Landhi and Korangi.

The K-Electric spokesperson said that during the break from rain, power is swiftly being restored.

“Power supply to the city continues to remain stable, and approximately 60 feeders out of 1,900 have been powered down mostly for safety reasons.”

The spokesperson said that due to waterlogging and illegal connections, some areas may remain powered down as a safety precaution, but as clearance is received, power restoration will be underway.

The Pakistan Meteorological Department (PMD) said that many areas of Karachi received very intense rain in the early hours, and it continued for several hours, while in some areas over 100mm of rain was recorded during the spell that caused rainwater to accumulate on main arteries in almost all the districts.

Sindh Chief Meteorological Officer Dr Sardar Sarfaraz said that the heaviest spell of the current monsoon system was observed in Monday’s early hours, as hours-long showers were caused by the strong cells that had formed over Karachi coupled with the Arabian Sea’s support.

Dr Sarfaraz said that the latest data indicate that Karachi may continue to receive moderate rain with some heavy falls on Tuesday, adding that intermittent rain and showers are also possible on Wednesday because the monsoon system is getting strength from the Arabian Sea.

Sindh Chief Secretary Dr Muhammad Sohail Rajput said on Monday that shanty dwellings built on storm water drains in old areas of Karachi are the main cause of urban flooding in these neighbourhoods. Visiting different areas, he said the provincial government will sort out the chronic drainage issue.