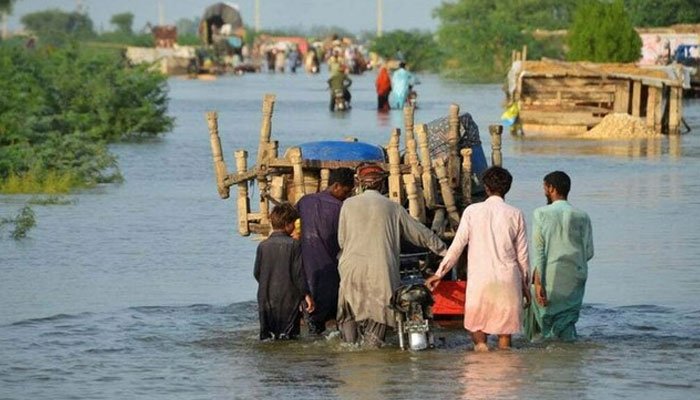 At least 19 more people have lost their lives to widespread flash floods across the country during the last 24 hours, pushing the overall death toll to 1,186, said the National Disaster Management Authority (NDMA) in its report with the latest statistics.

According to the NDMA report, the latest 12 deaths took place in Sindh, four in KP and three in Balochistan. The deceased include nine children.

The disaster management authority said 256 people were injured in the flood-related incidents across the country.

The flash floods badly impacted 80 districts of the country, said the report.

The deceased include 244 women and 416 children. Meanwhile, the number of people injured as a result of the catastrophic flood reached 4896.

It is an “unprecedented climate catastrophe”: UN

The United Nations has called the recent flooding in Pakistan an “unprecedented climate catastrophe”, after over 1,000 people lost their lives to it, including 380 children.

The country has seen double the average rainfall, a whopping 15.4 inches in August alone.

Flash floods have swept away entire communities. Reportedly, one-third of the country is currently submerged in water with 15% of the population impacted.

Experts fear the spread of water-borne diseases due to stagnant water.

it is due to ten times normal rainfall: ESA

Rains, described by UN chief Antonio Guterres as a “monsoon on steroids” have claimed hundreds of lives since June, unleashing powerful floods that have washed away swathes of vital crops and damaged or destroyed more than a million homes.

Data from the EU’s Copernicus satellite has been used to map the scale of the deluge from space to help the rescue efforts, the ESA said in a statement.

“Heavy monsoon rainfall — ten times heavier than usual — since mid-June have led to more than a third of the country now being underwater,” it said.