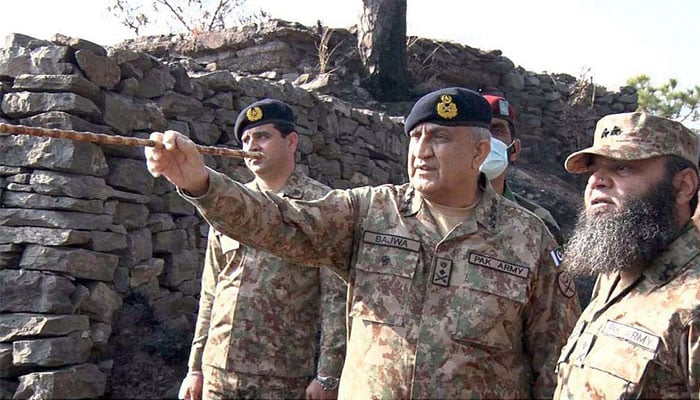 “[The] Pakistan Army has always remained a dominant player in national decision-making. Due to its historic role in country’s politics, the military drew severe criticism from public and politicians alike,” said Gen Bajwa in an exclusive interview with UAE-based publication Gulf News.

The COAS will hand over command of the army to General Asim Munir tomorrow (Tuesday) who was appointed as his successor by the government last week.

The general reiterated that the army has restricted its “role to its constitutional mandated task only by deciding to make it ‘apolitical’.”

“This decision, though being viewed negatively by a segment of society and led to personal criticism, will facilitate in reinvigorating and strengthening democratic culture, assist in supporting state organs to effectively perform and deliver. Above all, this decision will help enhance army’s prestige in the long term,” he said.

The army chief said that the military has enjoyed unmatched respect and trust of the Pakistani nation throughout the country’s history.

“Army’s positive and constructive role in Pakistan’s national security and development has always received unwavering public support. I believe that public support and affinity towards the armed forces tends to erode when the military is seen to be involved in political affairs, and, therefore, I considered it prudent to shield Pakistan Army from the vagaries of politics in Pakistan,” said Gen Bajwa.

The army chief assured that despite the “some criticism and undue vilification of the armed forces through mass propaganda and meticulously crafted false narratives”, the institution will remain committed to its apolitical role.

“I am certain that this political quarantine of the armed forces will auger well for Pakistan in the long term by fostering political stability and strengthening the army-to-people bond,” said Gen Bajwa.

Reflecting on his career in the military, Gen Bajwa said that it is a “profound privilege to have served and led one of the finest military forces of the world during a most challenging time in Pakistan’s history”.

“We have worked out plans to effectively align ourselves with the requirements of future battlefield, making the best use of our limited resources,” said Gen Bajwa.

The army chief foresees that the army will emerge as a “cohesive, agile, adaptive and a modern force, which can complement other elements of national power by maintaining a credible deterrent capability to help foster a secure environment for national development and socio¬economic well-being”.

The chief of army staff (COAS) noted that “perpetual conflict and instability” in South Asia has made the region “least integrated” in the world despite the huge economic potential and large population.

“The region has been referred as the strategic chessboard due to its role in great power rivalries in the past — the recent being the two-decades-long war against terror led by US and the West in Afghanistan. Pakistan’s western border has therefore seen a great deal of instability due to the conflict in Afghanistan. Post-US withdrawal, a modicum of stability has been seen in the country with reduction in violence. However, the situation remains volatile,” noted the army chief.

The army chief noted that Islamabad’s strategic partnership with Beijing has “endured the upheavals of strategic environment through many decades”.

“The ever-sharpening global power contestation, however, now places Pakistan in a delicate position with regard to balancing our relationship with China and the West. Pakistan is trying to steer itself prudently in this increasingly contested strategic environment and ensuring that we are not pulled into any future iteration of cold war,” said Gen Bajwa.

The army chief noted that “Iran’s peculiar geo-strategic orientation” is a source of concern for the world but assured that Pakistan has “always desired peaceful and friendly relations with our Muslim neighbour and tried to maintain a positive working relationship”.

“On the internal front, Pakistan’s successful counter-terrorism campaign has turned the tide of terrorism and we continue to make meaningful efforts to overcome the menace of extremism and residue of terrorism,” said Gen Bajwa.

However, the outgoing army chief raised concern about the “worrisome trend” of the “streaks of political intolerance” in Pakistani society.

“We will keep striving for a society which is tolerant, rational and does not discriminate on the basis of political orientation, faith, ethnicity or creed. Another major concern is economic frailty, which tends to exacerbate other issues concerning human security such as health, education, access to food and clean water, and mitigating threats posed by climate change,” said Gen Bajwa to a question on the main challenges facing Pakistan.

While talking about Pakistan’s campaign against terrorism, Gen Bajwa stated that the emancipation of people of border areas is a “top priority of Pakistan’s civil and military leadership”.

“All these issues are closely intertwined and every step taken towards that direction remains close to my heart,” said the army chief.

The general was also asked about Pakistan’s ties with the Middle East to which he stated that the country enjoys a “special bond and fraternal ties” with Gulf Cooperation Council and other Middle Eastern countries.

“Pakistan remains grateful to our brethren for their generous and unconditional support to Pakistan, especially during testing times,” said the army chief, adding that Islamabad has always supported the strategic interests of its Middle Eastern friends.

“Military diplomacy is complementary to Pakistan’s foreign policy and plays its due role in fostering Pakistan’s bilateral relations with other countries, including in the Middle Eastern region. Our intimate engagements with the Arab countries at the leadership level have continuously helped nurture the long-standing ties and translate them into practical cooperation in areas of common interests,” said the army chief.

When asked about his message to the youth, the army chief urged them to “devote their time and energy towards education and skill development”.

But the general warned the youth to ensure that they “are shielded from divisive propaganda and information warfare” which is aimed to polarise the society and erode the mutual trust the army enjoys with the public.

“Pakistan should always come first — before any other marker of identity,” said Gen Bajwa.