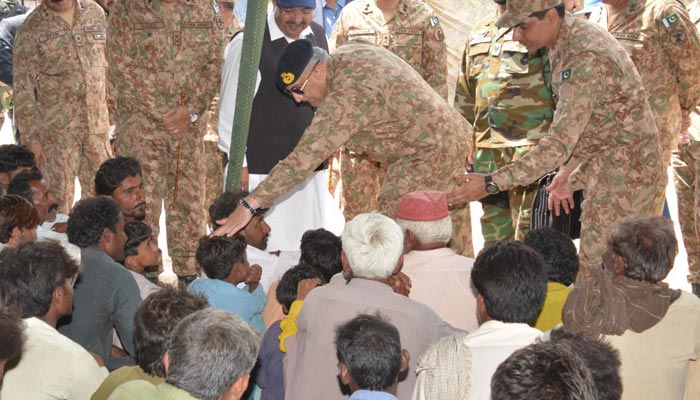 RAWALPINDI: The Chief of Army Staff (COAS) General Qamar Javed Bajwa on Friday spent time with the victims of the devastating floods in relief and medical camps, where he also met troops busy in rescue and relief activities in Sindh’s Malkani Sharif area.

According to a statement released by the Inter-Services Public Relations (ISPR), the army chief visited the flood-affected areas of Badin.

The statement further shared that the COAS appreciated the business community’s support in natural calamities in the past as well as during the recent flooding.

“The business community has always helped the people of Pakistan during various natural calamities including their support in recent floods.

“The business community members acknowledged the role and sacrifice made by the Pakistan Army in providing a safe environment for the country’s economic prosperity, and assured COAS maximum support for the flood-affected people,” ISPR said in the statement.

This is a real thing. be nice to yourself