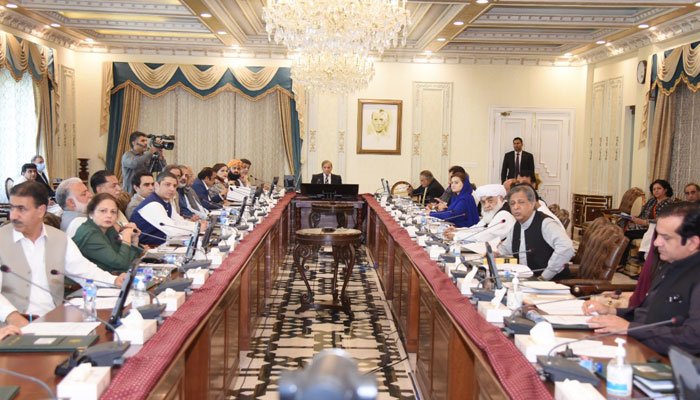 ISLAMABAD: The federal cabinet on Friday announced the formation of a committee to investigate the diplomatic cypher that it was told had been “stolen” from the records of the Prime Minister’s House, a statement issued by the premier’s office said.

Former premier and PTI Chairman Imran Khan, who was voted out through a no-confidence motion, had brandished a “threat letter”, which was the cypher, on March 27 at a public gathering before his ouster, claiming that his government had been threatened by the US and the Opposition was involved in the conspiracy.

The statement from the PM office, issued after the cabinet meeting chaired by Prime Minister Shehbaz Sharif, said that the body was provided with a briefing on the issue of diplomatic cypher where it was revealed that the copy of the relevant document was missing from the Prime Minister House’s records.

The statement said that the meeting termed the “theft” of the letter a serious matter and, following a detailed consultation, the cabinet formed a special committee to launch an investigation.

On the issue of recent audio leaks, the cabinet endorsed the National Security Committee’s decision to conduct a thorough investigation into the issue.

The cabinet also “expressed serious concern” on how the recent audios of former prime minister Khan, Azam Khan, and other persons related to the diplomatic cypher have “exposed the criminal conspiracy of the former government and Imran Niazi”.

The body noted that the cypher was given “fictitious meanings” for political gains and to harm “key national interests”, adding that after committing “fraud, forgery, and fabrication” the letter was stolen.

“This is a serious violation of the constitutional oath, and other relevant laws, especially the Official Secrets Act. It is an unforgivable crime against the state as political interests were given priority over key state interests,” said the cabinet. It added that due to this it was necessary to investigate the whole matter carefully and to determine the responsible parties and punish them as per the law.

In the first one, he was allegedly telling Azam Khan to “play” with the US cypher had surfaced.

In it, Khan can allegedly be heard discussing the cypher with party leaders.

The cabinet also condemned the harassment of Information Minister Marriyum Aurangzeb by PTI supporters in London.

On the other hand, on the recommendation of the Ministry of Law and Justice, the cabinet gave the approval for the filing of an explanatory reference by the president on the recommendation of the PM regarding the previous Supreme Court decision in the Riko Diq case. Along with this, a clarification will also be sought regarding the approval of Foreign Investment (Protection & Promotion), Bill 2022 in the reference.

On the interior ministry’s recommendation, the cabinet also approved the new standard operating procedure for the inclusion and exclusion of names in the exit control list (ECL).