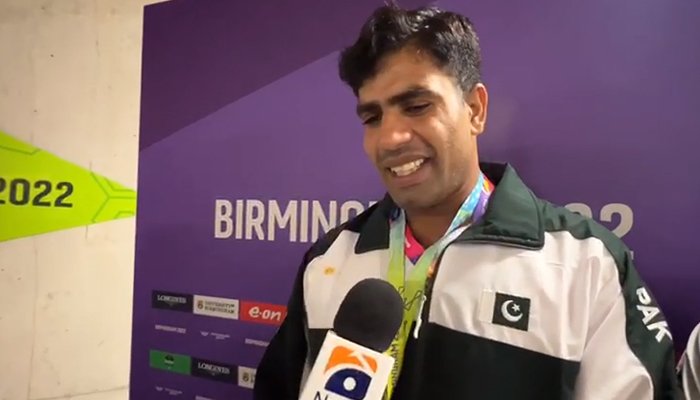 BIRMINGHAM: Pakistan’s Arshad Nadeem, who won the gold medal in the javelin throw event of the Commonwealth Games, on the occasion wished India’s Neeraj Chopra well after he was unable to make it to the competition due to injury.

Speaking to Geo News shortly after bagging the medal, Nadeem said: “Neeraj Chopra was unable to attend the event this time due to injury. I wish him good luck in the upcoming competitions. May God grant him health. If he had been here, it would have been all the more fun.”

Although rivals on the playing field and by virtue of their nationalities, the camaraderie between the two athletes is well documented. They have encouraged and praised each other on multiple occasions and with their bromance have become quite the media darlings of both countries.

Nadeem on Sunday became the first javelin thrower from the sub-continent to cross the 90 metre mark to win the gold medal at the Birmingham 2022 Commonwealth Games.

Nadeem, who regularly competes with Chopra, a Tokyo Olympics gold medallist, came up with a personal best of 90.18m in his fifth throw.

“I thank Allah and my parents who prayed for me and the Pakistani nation who stayed up and prayed for me. Alhamdulliah, God has granted me a medal and I am very happy,” he told Geo News.

Nadeem said that he did not want to let down his fans who had been cheering him on to finally win a gold. “I had come with the hope that I will win a gold medal for my fans and so with their prayers, I have won it.”

The athlete, commenting on his injuries and how he had managed to participate in spite of them, said: “I had elbow and knee injuries and Alhamdulillah [but the doctors] really worked on me, my injury.”

He also thanked the Pakistan Sports Board and the Punjab Sports for facilitating his participation.