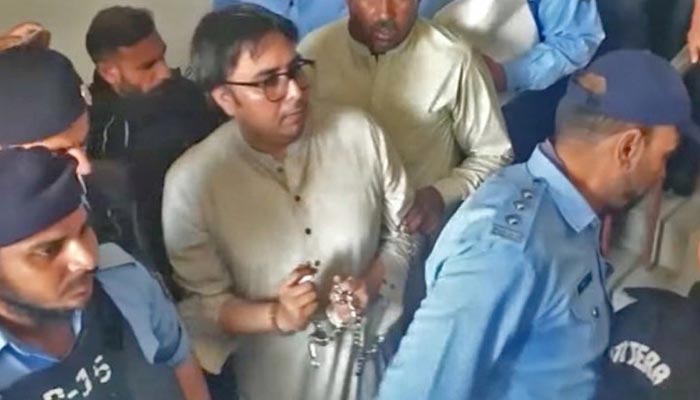 Islamabad Police has left the jail with Gill as Punjab Police personnel returned back after hours-long drama outside the jail premises. It was further learnt that Gill will be first taken to PIMS for a medical checkup.

Gill’s custody has been given to Islamabad Police according to the directions of the court. Sources in the police said that he will be shifted to a police station after the medical examination.

Earlier, sources, citing a document titled ‘Emergency Shifting’ available with Geo News, said that after Gill’s checkup the doctors of the Adiala jail and the authorities concerned were directed to shift the PTI leader to DHQ Hospital Rawalpindi.

Following the directions, Islamabad Police and Rawalpindi Police had reached the Adiala jail to shift Gill; however, he refused to go with the former. This led to hours-long drama between the two law enforcement agencies.

The Rawalpindi Police was adamant about shifting Gill to DHQ Hospital while Islamabad Police insisted on transferring the PTI leader to the federal capital as per court orders. Following the argument, additional personnel of Islamabad Police were called to the jail.

According to sources in jail, it was learnt that Gill had complained of difficulty in breathing and ill health due to alleged torture after which he was shifted to the jail hospital for a checkup.

Meanwhile, the sources had said that PTI Chairperson Imran Khan had ordered Gill to create an emergency-like situation so that he could be transferred to the hospital.

Meanwhile, after reports of the worsening situation, the Ministry of Interior had also summoned Rangers and FC to execute the court orders.

Following the development, the PTI — on its official Twitter handle — shared the video of Gill being transferred to PIMS in an ambulance with an oxygen mask.

“Pakistan is undergoing the worst kind of fascism,” it captioned the video.

Speaking to journalists, the information minister said the PTI chairman has disregarded all laws and the party is using every tactic to protect Gill from the investigation.

‘Case of contempt of court’

Sources in the ministry told Geo News that a case of contempt of court would be filed in case the Adiala jail authorities do not handover Gill to Islamabad Police. In this case, PTI chairman, Punjab Chief Minister Pervez Elahi, provincial home minister, and jail authorities will be made parties.

Rejecting all allegations levelled against Islamabad Police, the spokesperson said that Gill was not subjected to any kind of violence during physical remand.

The spokesperson further added that Gill underwent regular medical checkups, on the directions of the court and judges, which proves he wasn’t tortured.

The spokesperson further added the orders of the court have been given to the jail administration and the Islamabad Police has completed all legal requirements.

He further added that the authorities will adhere to the orders of the court and expects the jail administration to cooperate.

The spokesperson further added that the head of the investigation team and senior superintendent of police will personally monitor the entire process.

Reacting to allegations levelled by the information minister, PTI leader Farrukh Habib claimed that Marriyum has been tasked to spread misleading propaganda.

“She should first comment on her party leaders who are currently summoned by the courts,” he said, adding that it is Prime Minister Shehbaz Sharif and his son Hamza Shahbaz who have been violating the court orders.

Recalling that both the PML-N leaders were “imposed” on the country the day of their indictment, he questioned: “Was this observance of the law?”

He went on to accuse of them violating laws by mentioning that PML-N supremo Nawaz Sharif lied to leave the country.

“Khan has never encouraged violation of laws,” the PTI leader said, adding that it is their plan to force Gill to give a statement against Khan by torturing him.

Court orders handover of Gill to police for 48 hours

Earlier today, an Islamabad district and sessions court remanded the PTI leader in police custody for 48 hours in its verdict on a review plea seeking Gill’s physical remand in a sedition case.

The court had reserved its verdict earlier in the day after the completion of arguments by all parties.

The PTI chairman had condemned the sessions court’s decision, saying that he is concerned about Gill being sent into police custody once more.

“Gill is in a fragile state of mental and physical health because of the torture inflicted upon him when he was abducted and taken to an undisclosed location,” Imran wrote on Twitter.

Gill was arrested last Tuesday afternoon from Banigala Chowk in the capital a day after making controversial remarks on a private TV channel. He was subsequently booked on charges of sedition and inciting members of state institutions against the Pakistan Army.

A treason case was registered against him at the Kohsar Police Station under several sections of the Pakistan Penal Code, including 124-A (sedition), 131 (abetting mutiny, or attempting to seduce a soldier, sailor or airman from his duty), 153 (wantonly giving provocation with intent to cause riot if rioting be committed; if not committed), 153-A (promoting enmity between different groups, etc), and 505 (statements conducing to public mischief), 506 (punishment for criminal intimidation), among others.