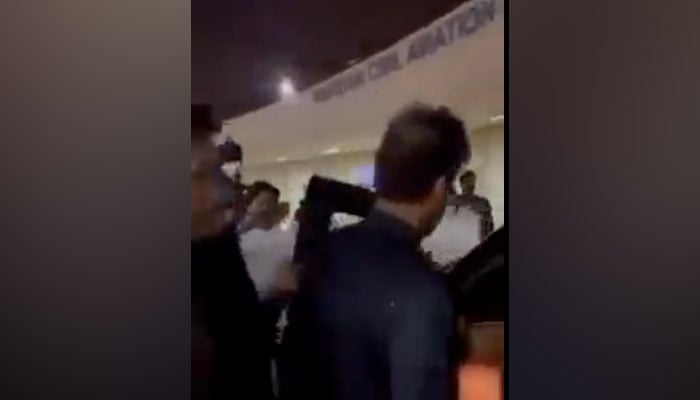 Multiple social media accounts claim that former prime minister Imran Khan walked out of the hospital Thursday night, despite being shot in his legs.

The claim is false.

On Thursday evening, Imran Khan, who is also the chairman of PTI, was shot when his anti-government protest convoy reached Wazirabad, Punjab. Khan was wounded in the leg and was rushed to Lahore’s Shaukat Khanum Hospital last night.

Soon after the gun attack, a video began doing the rounds on social media, which showed Khan walking to his vehicle, surrounded by supporters, police and the media.

Several accounts alleged that the video was from last night, after Khan was rushed to the hospital.

“Imran Khan was shot,” wrote a Twitter user, “The operation was done and after an hour he started walking on both legs…what a joke.”

Another social media account posted the same video and asked if any doctor in the world could tell how after receiving two bullet wounds in the leg “can a person walk like this himself?”

The video is old and not from Thursday night.

In the footage, the building behind Imran Khan is that of the Pakistan Civil Aviation Authority and not of the Shaukat Khanum Hospital.

Geo Fact Check then also reached out to a senior employee at Shaukat Khanum Hospital for further confirmation.

“[Khan] is still admitted to the hospital,” he said, on the condition of anonymity, “The video is incorrect. He was brought here last night and then operated on. He might remain in the hospital tonight as well.”

Follow us on @GeoFactCheck. If our readers detect any errors, we encourage them to contact us at [email protected]