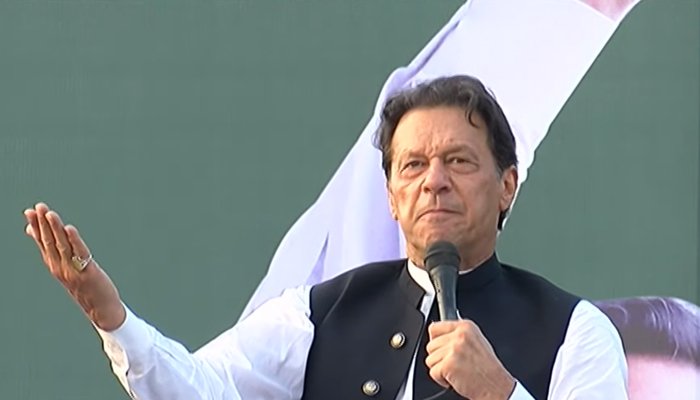 RAWALPINDI: In the lead up to his anti-government protest, PTI Chairman Imran Khan Monday warned authorities against taking any steps to stop his party’s “Azadi March”.

Khan has repeatedly been issuing warnings to the coalition rulers ahead of his long march to the capital, while the government is mulling plans to thwart his protest.

The PTI has been repeatedly holding anti-government rallies since Khan’s ouster from the Prime Minister’s Office and the latest long march will be held in the coming days, according to the party chairman. However, the date is yet to be announced.

In his address during an oath-taking ceremony in Rawalpindi, Khan said that the “sea of people” he expected on May 25 — the last time that PTI marched to Islamabad — did not show up.

But now, the PTI chairman said that he is planning the nitty-gritty of the upcoming march and that he wanted his organisational set-up to gear up and knock on every door for partaking in the protest.

Khan said that he would announce the date for the march later on, but warned Interior Minister Rana Sanaullah and Prime Minister Shehbaz Sharif that even if they “hang themselves upside down”, they won’t be able to stop the march.

“I am readying the nation for the march. This will be a defining moment in Pakistan’s history,” he said, adding that he will be monitoring the progress of the march himself.

Moving on, the former prime minister said that he has known Sanaullah and PM Shehbaz for the last 40 years. “The more cowardly a person is, the crueller he is, the brave does not do cruel things, he has confidence in himself.”

Khan added that the incumbent rulers marched four times during his tenure, but he never stopped them. “Maryam Nawaz wanted to march, but qeema nans ended midway. Bilawal Bhutto did the march of kanpien tang rahi hain.”

The ex-prime minister said that his phones were being tapped and his house workers were being bribed to turn against him. He alleged that people supporting him were being harassed.

“They only want us to accept them in government, but the nation will never accept them in power. That is why I am planning for a long march. We know what we are planning, but they don’t,” he added.

In a swipe at PML-N supremo Nawaz Sharif, Khan said that he addressed a “heartfelt” press conference from London where he described his trials.

“But the nation is asking you a question: where is the stolen money?” Khan said as he slammed the three-time prime minister.