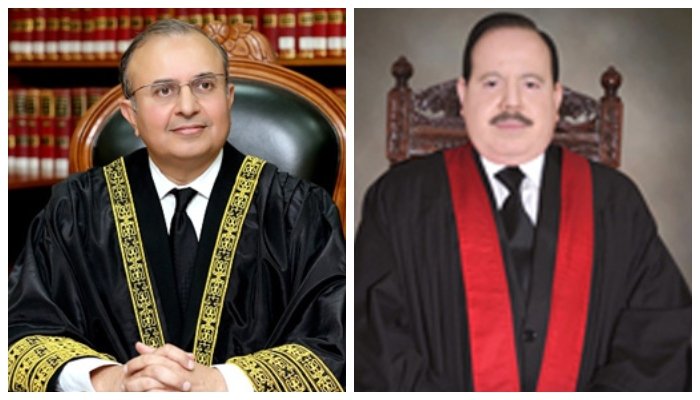 ISLAMABAD: Two more members of the Judicial Commission of Pakistan (JCP) have penned a letter to Chief Justice Umar Ata Bandial, urging him to appoint judges to Supreme Court’s vacant posts, warning that delay may give rise to “unwanted rumours of petty politics”.

Justice Sardar Tariq Masood and Justice Mansoor Ali Shah penned a joint letter — a copy of which is available with Geo.tv — to Chief Justice Umar Ata Bandial a week after Justice Qazi Faez Isa had written a letter to the top judge for the same demand.

The justices said that in order to actualise the constitutional obligation under Article 175A(8) of the Constitution, meetings of the JCP should automatically be scheduled at the earliest on the occurrence of any vacancy in the apex court.

The judges said that it was essential to honour the constitutional obligation and to keep the courts fully functional in order to ensure speedy dispensation of justice across the country and to protect the right to access to justice of the people.

Justices Masood and Shah mentioned that the responsibility of timely filling the vacancies in a court falls primarily on the shoulders of every member of the JCP.

Any inordinate delay in the performance of this function, except for an unavoidable cause, which is not there in the present case, is both unfortunate and undesirable, they noted.

“Supreme Court of Pakistan has five vacancies that have piled up since February 2022, over a period of almost nine months. We as members of the JCP, have time and again requested you to hold a meeting of the JCP to fill these vacancies.”

“Our meetings with you in this regard have ended in vain,” they said.

The justices told the CJP that it was crucial to ensure that the vacancies are filled as a delay gives rise to “unwanted rumours of petty politics, lobbying and quid pro quo appointments”.

The issues, the judges said, not only undermine the institution but also seriously impair the neutrality and the transparency of the appointment process.

They reminded the CJP that they have taken an oath to defend the Constitution and in line with the Al-Jehad Trust case (1996), “permanent vacancies occurring in the offices of […] judges normally should be filled in immediately [but] not later than 30 days” from the date of occurrence of the vacancies, and it is a “constitutional obligation” of the Judicial Commission of Pakistan”.

The inordinate delay of almost nine months, in this case, must be urgently addressed first, they noted.

In order to swiftly move forward to fill the current vacancies, the judges said, they had proposed two options — either consider the five chief justices of the five high courts against five vacant posts or consider the top two judges from every high court and open these options to vote in the next meeting of the JCP.

“This is the best way forward in the current circumstances, til such time that more sophisticated selection criteria and Constitution-compliant Rules are framed,” they added.

In his letter earlier, Justice Isa urged CJP Bandial to “immediately” convene a meeting of the JCP to fill the vacant SC seats as unfilled seats may leave the country’s highest court “dysfunctional”.

The senior puisne judge highlighted that the five vacancies mean that the apex court has lost 726 working days and more than “50,000 cases have accumulated in the Supreme Court” during this time.

“It pains me to state that cases filed in the Supreme Court are unlikely to ever get decided if the vacancies are not filled in,” Justice Isa told the CJP in the letter.

The judge reminded the JCP chairman that people have “invested heavily in the Supreme Court which employs about 700 staff and has a considerable budget”. He further argued that it was “not understandable why the Supreme Court” was working at a 30% reduced capacity in such circumstances.”

The last JCP meeting was held in July last year where it was reported based on sources that the commission had rejected CJP Bandial’s nominated judges of higher courts for their elevation to the SC.

CJP Bandial had presided over the judicial commission’s session, where a total of five judges, two from the Sindh High Court and three from the Lahore High Court (LHC), were considered.

However, the official statement issued by the Supreme Court stated that the JCP chairman, after detailed discussion, proposed to “defer the meeting in order to enable the Hon’ble Chief Justice of Pakistan to place additional information and data about those already proposed and if he considers appropriate, add more names to the list of proposees for consideration by the JCP”.

Following criticism, the apex court uploaded the audio of the JCP meeting on its website.

“In these exceptional circumstances the Hon’ble chairman JCP has been pleased to relax the restriction under Rule 5(4) of the JCP Rules, 2010 and has directed for the audio recording of the JCP proceedings of 28.07.2022 to be made available on the official website of the SCP,” said a statement issued by the apex court.

The Supreme Court, in its statement, claimed that the “audio recording from time slot 1:29:45 to 1:38:08 contains the statement” made by Attorney-General for Pakistan Ashtar Ausaf Ali, led to the deferment of the meeting as claimed by the PRO.

The statement also claimed that the AGP “did not assess or reject the merits of any of the High Court judges proposed for appointment to the SCP”.