The message from Swat is loud and clear 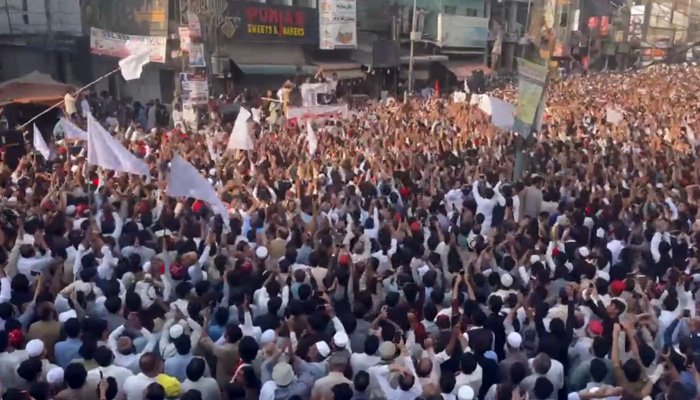 Massive protests have erupted in the beautiful valley of Swat – against militancy and terrorism, as thousands of people took to the streets of the largest city of Swat district and commercial and industrial hub, Mingora, on Monday October 10.

This mass mobilization is an encouraging sign, showing the current mood against militancy and reactionary groups. The people are very obviously saying that they are not ready to accept the return of militancy and terrorism. While the people have learnt the necessary lessons based on their past experience, it is not clear how long it will take for our policymakers to learn these lessons.

The message from Swat is loud and clear: the people want peace, development and prosperity. They do not want the return of the Taliban, and of terrorism and destruction in their areas.

The people of Swat are not ready to accept the return of a reign of terror in their lives. The memory and trauma of the horror, destruction and terror experienced by the people during the Taliban insurgency from 2006 to 2009 is still there. The Swat, that was known for its natural beauty, pristine springs, waterfalls, orchards, lakes and lush green mountains was turned into a living hell by TTP militants. Innocent people were killed, girls’ education banned, hotels blown up and the local economy ruined. The people of the area lost their livelihoods. They do not want to go back to that dark period again and are determined to resist the return of militancy in their areas. They want peace in their lives and they paid a heavy price for this peace.

The recent protests were triggered by the killing of a van driver who was shot dead and two schoolchildren injured in a targeted attack on Monday morning in the Gulibagh area of Charbagh Tehsil. Working people, lawyers, traders, teachers, students, political activists and young people came out on the streets in huge numbers and expressed their anger against militancy and target killings. Protests are also taking place in some other districts of KP province against terrorism and target killings.

This is not the first time the people of Swat and other districts have responded to terrorism recently with massive demonstrations. The recent demonstrations are the second wave of protests in Swat and surrounding districts. The first wave of protests erupted in August this year when militants emerged in Tehsil Mata and Kabal of Swat district and incidents of target killings increased. As a result, thousands of people took to the streets in Swat and Lower Dir districts, voicing their concern at what seems to be a possible re-emergence of Taliban militants.

The recent incidents of target killings and terrorism have once again created doubts and fears. Thousands of local people depend on tourism for their livelihood. The reports of a possible return of the TTP have managed to spread fear among the local people and tourists. Tourism and terrorism cannot go hand in hand.

The people of KP in general and Swat in particular suffered a lot as a result of the Taliban insurgency from 2006 to 2009. Women suffered even more; girls’ schools were closed and destroyed; and Swat under the Taliban was converted into a killing field.

The people of Swat suffered a lot during the TTP rule and the subsequent operations. Hundreds of thousands of people were forced to leave their homes. The Taliban had established a reign of terror in Swat. The military launched an operation to flush out the Taliban and restore the writ of the Pakistani state in the Malakand division. The Pakistan Army had conducted military operations Rahe Raast and Rahe Haq from 2007 to 2009 to retake control of Swat.

The fears expressed by the people are not completely baseless. These are based on past experience, a time to which the people are not ready to go back – a dark age of destruction, killings, repression. They want peace and prosperity in their area and are justified in their concerns.

It is the responsibility of the state to maintain law and order and to provide protection and peaceful living. The KP government needs to take a clear position on this sensitive issue. The government shouldn’t appear apologetic and the state must act to maintain peace and protect its people.

The writer is a freelance journalist.