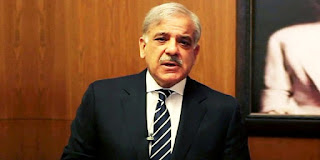 Pakistan Muslim League-Nawaz President Shehbaz Sharif expressed his good wishes for the speedy recovery of British Prime Minister Boris Johnson who has been moved to intensive care in hospital after his coronavirus symptoms worsened.
Shehbaz Sharif said it was worrisome news but he hoped that PM Boris would resume his responsibilities soon.

As per the UK media reports, a spokesman of 10 Downing Street said PM Boris was moved on the advice of his medical team and was receiving “excellent care”.

The prime minister, 55, was admitted to hospital in London with “persistent symptoms” on Sunday evening.