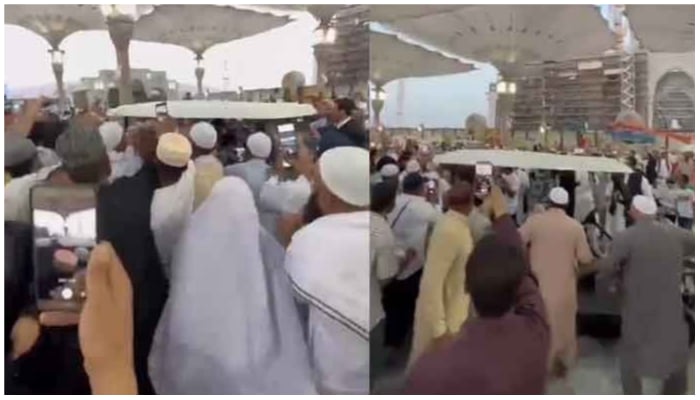 The Prime Minister and Crown Prince of Saudi Arabia Muhammad bin Salman (MBS) has ordered releasing all Pakistani citizens who had been imprisoned in the kingdom for rioting at Masjid-e-Nabawi (PBUH).

Prime Minister Shehbaz Sharif had requested the Saudi crown prince to pardon the Pakistanis arrested in the incident and release them.

Following the decision of the crown prince, PM Shehbaz expressed his gratitude.

“I am deeply grateful to the Crown Prince of Saudi Arabia Muhammad bin Salman, who — on my request —  ordered the release of the Pakistanis arrested in Saudi Arabia for the April 2022 incident. We pray to Allah Almighty to make us better Muslims who forgive each other’s mistakes,” he wrote on Twitter.

Earlier this year, a court in Madinah sentenced three Pakistanis — Khawaja Luqman, Muhammad Afzal, and Ghulam Muhammad — to eight years in prison. Meanwhile, another three Pakistani citizens — Anas, Arshad, and Muhammad Saleem — were sentenced to six years in jail for creating chaos and violating the sanctity of the holy mosque.

In April, during premier Shehbaz Sharif’s visit to Saudi Arabia, a group of protesters, allegedly belonging to the PTI, loudly chanted slogans against the PM and his delegation as soon as they entered the mosque to pay their respects at the Roza-e-Rasool (PBUH).

Upon the arrival of PM Shehbaz and his delegation at the mosque, the protesters started chanting slogans of “chor, chor (thieves)” when they saw the premiere and harassed and raised objectionable slogans against Marriyum Aurangzeb.

The protesters also misbehaved with the JWP chief and Federal Minister for Narcotics Control Shahzain Bugti and pulled his hair. The protesters continued to film the entire episode on their mobile phones.