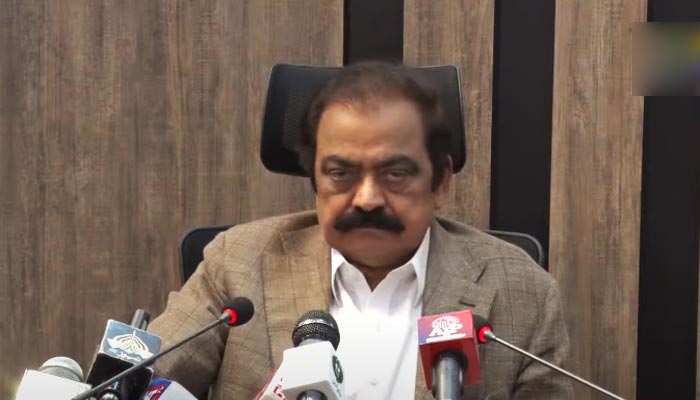 ISLAMABAD: Interior Minister Rana Sanaullah Saturday accused PTI Chairman Imran Khan of planning to spread chaos in the capital under the banner of the long march, citing purported leaked audio of Ali Amin Gandapur, who can be heard speaking about bringing ammunition for the long march.

Addressing a press conference, Sanaullah released an audio leak of Gandapur where he can be heard speaking to an unknown person about bringing arms and ammunition.

The interior minister claimed that as per initial investigations details of this conversation have been secured by the ministry, however, he refused to reveal the identity of the unknown person allegedly speaking to the PTI leader.

Terming Khan’s attitude “undemocratic”, the interior minister — while addressing a press conference in the federal capital — said the intentions of the PTI chief are not good. “We have been saying that Imran Khan fitna wants to mislead the nation.”

“Khan wants people to die instead of holding a long march,” Sanaullah said, accusing him of planning to destroy and divide the country.

Recalling Faisal Vawda’s presser held a few days ago, the interior minister said that a close aide of Khan admitted that PTI long march will turn out to be a “bloody march”.

“Vawda was an insider and the PTI immediately distanced itself from the former minister’s statement,” he added.