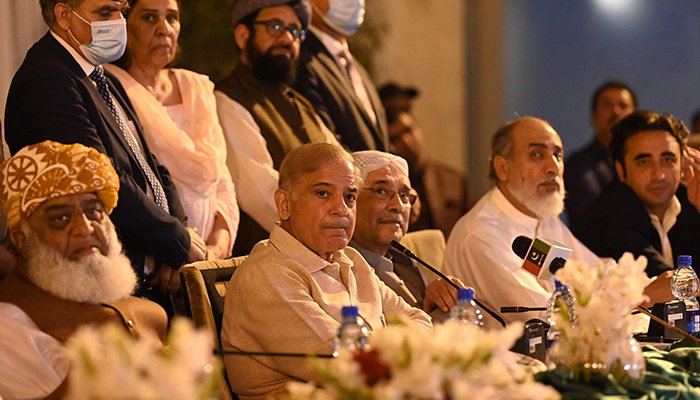 ISLAMABAD: The ruling coalition Friday said that amid devastating floods, the Khyber Pakhtunkhwa government indulged in politics and refused to implement conditions laid down in the agreement with the International Monetary Fund (IMF), The News reported.

In a joint statement, the allied parties said the letter of KP Finance Minister Taimur Jhagra Finance Miftah Ismail was a ploy to sink Pakistan in the flood of economic crisis.

They said it was former prime minister Imran Khan who signed the agreement with IMF on tough conditions and tied down the “hands and feet of the Pakistani economy”.

Then Khan himself violated the agreement and got the programme suspended and laid landmines in the foundation of the Pakistan economy by giving subsidies so that the country would default, they said.

In the statement, the coalition partners said the government was compelled to take very determined and difficult decisions in order to save Pakistan from default.

After persistent efforts for four months, the value of the rupee and the economic condition started to improve, the statement said.

Although the people are still “drowning in the four years of economic disaster and the deluge of inflation” caused by Khan, they asserted.

They said it was known that the IMF would hold its board meeting on August 29 to revive the economic programme and despite that, the KP took a step with “bad intentions”.

This action proved that a “foreign-aided party” was bent upon pursuing an agenda for the economic destruction of Pakistan, they said adding: “Like before, we will defeat this conspiracy as well and will defend the economic sovereignty of Pakistan.”

The allies said the government was fully focused and giving priority to the rescue and relief of the flood victims.

Jhagra’s letter had surfaced earlier, which showed him informing the finance minister of the provincial government’s decision to withdraw from its commitment to provide a provincial surplus for this fiscal year.

In a letter to Miftah, Jhagra said that the provincial government had signed a memorandum of understanding (MoU) in the “greater national interest.”

However, citing various reasons, Jhagra said the provincial government could not fulfil the requirements of the IMF programme.

Addressing a press conference flanked by Information Minister Marriyum Aurangzeb and Coordinator to PM on Economy and Energy Bilal Kayani, Miftah had earlier slammed Jhagra for jeopardising the programme.

“The country is submerged with floods and you [KP government] are writing a letter regarding the IMF programme,” he said, lamenting that if PTI chief Khan doesn’t come into power are then will the KP government “destroy the country?”