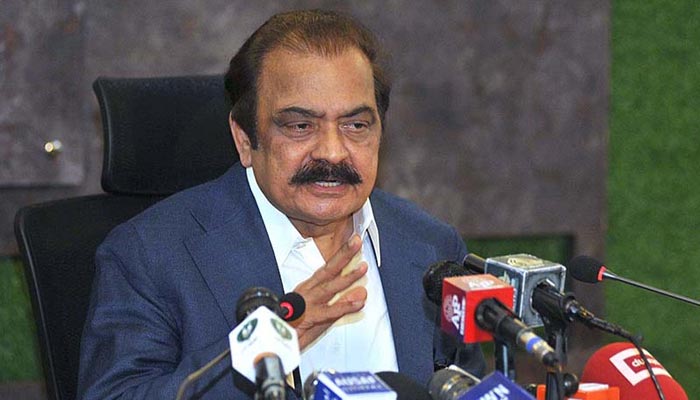 RAWALPINDI: A special judicial magistrate on Saturday issued a non-bailable arrest warrant for Interior Minister Rana Sanaullah, which is considered a tit-for-tat move by the Punjab government after two PTI leaders were taken into custody by the Federal Investigation Agency (FIA).

A spokesperson of the Anti-Corruption Establishment (ACE) Punjab said that it issued a non-bailable arrest warrant for the PML-N leader after he failed to appear in an inquiry.

Meanwhile, the ACE has also summoned former deputy speaker Dost Muhammad Mazari for the alleged encroachment of land owned by the government.

The ACE spokesperson said that the anti-graft watchdog also called Zahid Mazari, Sher Muhammad Mazari and Moazzam Mazari. They have been summoned to the Lahore headquarters on October 11.

Dost Mazari has been asked to appear at the ACE office at 1pm.

The spokesperson added that the assistant commissioners of Rojhan, Tehsildar and Patwari have also been summoned with records.

The move by the Punjab government is seen as a reaction to the PTI leaders’ arrest by the FIA in the foreign funding case.

A day earlier, the FIA took PTI Senator Saifullah Nyazee into “protective custody” for questioning in the foreign funding case.

Hamid Zaman, a founding member of the party, was also arrested from Lahore in connection with the case.

According to the sources, the Islamabad Police sent back the anti-corruption team as the PML-N leader’s residence is not within the limits of the Kohsar police station and his address on the arrest warrant is Faisalabad.

Whoever commits crime is a criminal: CM’s advisor

Musaddiq Abbasi, the advisor to Punjab Chief Minister Chaudhry Pervez Elahi on anti-corruption, said that Rana Sanaullah has been found guilty in the corruption case against him.

Speaking during his media talk at Punjab’s Directorate-General Public Relations, Abbasi said that the interior minister was accused of taking bribes in the form of plots and he was summoned by ACE in October.

According to the advisor, Sanaullah did not show up despite being summoned, which is why his team has the “right to arrest the criminal in any position”.

He added that his team is currently at the Kohsar Police Station.

“Let’s see if the police obey the court’s order or not,” Abbasi said, adding that Islamabad’s Inspector-General of Police has also been summoned. The advisor stressed that the crime should be considered, no matter who commits it.

“This is not a political case, Sanaullah’s crime has been proven,” Abbasi remarked, adding that the PML-N minister registered the plots in the case for Rs900,000.

“The housing society was inaugurated in 2017, while it received permission in 2018. Sanaullah was given two plots in the society as a bribe,” Abbasi revealed, adding that the FIR against the interior minister was registered in 2019, while he submitted his letter of acknowledgement in 2022.

“The letter of acknowledgement stated that what was written in 2018’s registry was incorrect. Rana Sanaullah wrote his property has been frozen by the Anti-Narcotics Force,” he shared, further revealing that the interior minister mentioned plans of construction on the property.