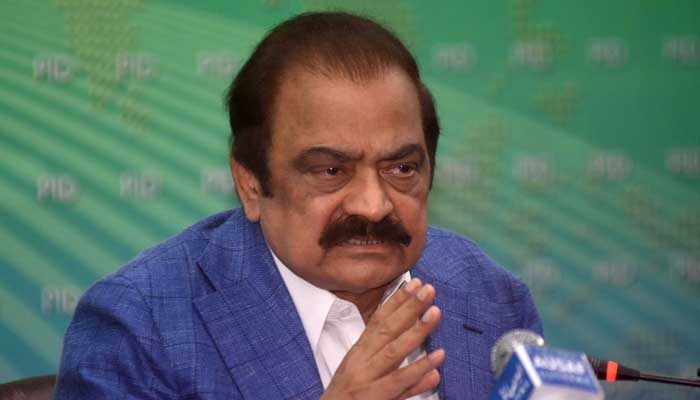 ISLAMABAD: Interior Minister Rana Sanaullah Tuesday said he will request the coalition government and Prime Minister Shehbaz Sharif to approve his request to give arms and ammunition to law enforcement agencies personnel who are being deployed to stop “armed groups” intending to invade the federal capital.

The interior minister, while speaking during a press conference, said that the weaponry would be given to them for “self-defence”. Sanaullah said he will make the suggestion following the potential chaos and trouble as the PTI’s long march approaches Islamabad.

According to Sanaullah, the government also so far decided to equip the police and security personnel with only teargas shells and rubber bullets to deal with any untoward situation.

“The group or long march aimed at attacking Islamabad should be stopped,” he added while addressing the presser.

He maintained that the number of participants in the long march is not greater than 6,000-10,000.

The participants of the PTI’s long march belonged to a “certain segment” of society who have become victims of Khan’s delusion, he added.

The interior minister accused Khan of spending the funds raised in the name of the poor on politics and contesting elections.

“All of you will be caught when an inquiry into Ehsaas Programme is launched,” he warned the PTI leadership.

Taking a jibe at Khan, the interior minister remarked: “Just 10 minutes after saying that the salary of chowkidar should be stopped, you fall at the watchman’s feet.”

Khan wanted to derail the country, he added.

The interior minister clarified that the KP and Punjab police would be under the supervision of the federal government if the situation turns worse. He also condemned Imran Khan’s statement about martial law.