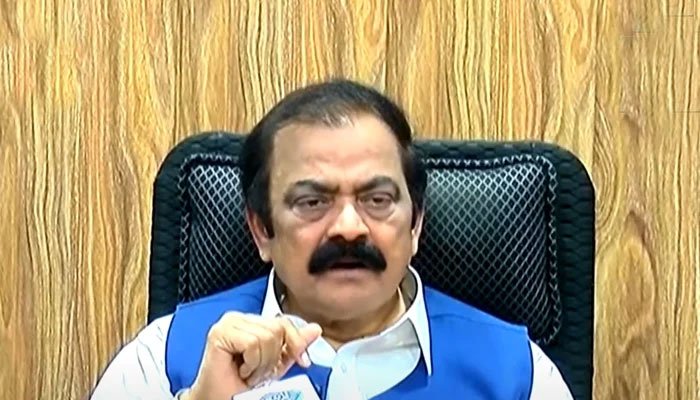 Federal Interior Minister Rana Sanaullah Khan has warned Chairman PTI Imran Khan of something happening to him that would be beyond his imagination in the event he steps out of his residence along with his supporters for the long march to the federal capital.

“I must request that everyone prays that Imran Khan leaves his home as his supporters begin the long march. He will have to brave situations that he might not have even imagined if he stays at home instead of going out and about, the minister said, speaking on Monday’s episode of the Geo News programme “Aaj Shahzeb Khanzada Kay Sath.”

The government will safeguard the red zone in Islamabad, he said, adding the law-enforcement agencies, including the paratroopers, the FC and police, are supposed to secure the red zone. If an organization is found guilty of dereliction of duty, it will affect the entire nation, he said.

Rana Sanaullah said that Imran Khan wants chaos in the country. The entire nation should prevent him [Imran Khan] from doing so and support the government.

The PML-N leader derided Imran Khan, saying, “I had said that Imran Khan would apologise. However, he went a step farther. He reached the court of the female judge in her absence. He instructed the court staff to inform her that Imran Khan had arrived to offer his apology.”

The interior minister said that Imran Khan says different things on different occasions. This is not a leader but a trouble, he said.

Slamming Imran, he said the PTI leader apologised earlier also. But, he is seen abusing the former chief justice of Pakistan after his retirement, he added.