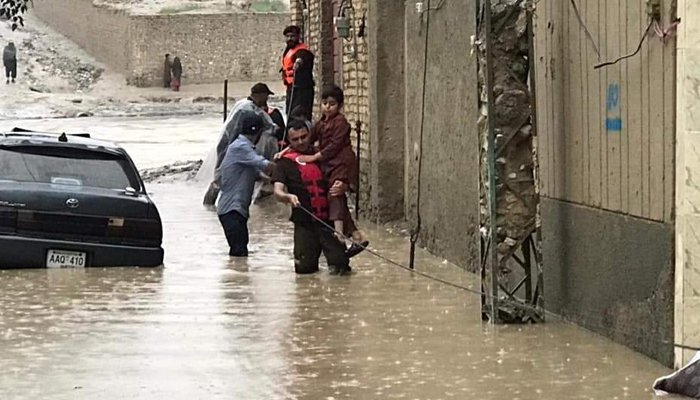 Relentless rains continued to pound Quetta on Friday, leaving Balochistan’s capital cut off from the rest of the country and hampering all sorts of communications in the city.

A key railway bridge which connects Quetta to other parts of Pakistan collapsed and flight operations to and from the provincial capital’s airport were also suspended.

The railway bridge collapsed near the Mach area in the Bolan district in the early hours of Thursday, which also suspended trade with Afghanistan, Iran and Turkey, a Pakistan Railways official said.

“Authorities have launched efforts to repair the bridge that was built by the British in 1885,” the official added.

In light of the rapidly worsening situation, the city administration issued a flood warning and asked people to contact two emergency numbers — 03368186794 and 03361187348 — in case of need.

Unfortunately, with no electricity since last night, police personnel and civil administration are not reachable on the issued numbers.

Pakistan Disaster Management Authority (PDMA) PDMA official Faisal Tariq said that hundreds were stranded due to floods after the heavy rains, however, rescue efforts were underway to take people to safe places.

In a statement, the Pakistan Telecommunication Authority (PTA) said that due to torrential rains and flash floods, the company’s optical fibre cable had been damaged.

“Efforts are being made to resolve this unprecedented situation. PTA is monitoring the situation and further updates will be shared,” it added.

In its latest report on the rain-related damage, the National Disaster Management Authority (NDMA) revealed that 34 more people died during the last 24 hours.

As a result of the fresh death toll, the total countrywide count has risen to 937 during this monsoon season, while 1,343 were injured after the new tally of injuries.

The report stated that more than 670,000 houses were damaged while nearly 800,000 animals died in the floods. It added that Tarbela Dam is filled to capacity while Chashma Barrage was about to be filled.

The cash-strapped federal government, while declaring the massive damage caused by the ongoing heavy rains and flash floods to public life and property in the country a climate-induced humanitarian disaster, urged the international community to come forward to help provide relief to calamity victims.

“Though [we are] mobilising resources to cope with the heavy monsoon flooding, we are painfully aware that there is a distressing gap between resources and rescue operations and the number of people in need of urgent shelter,” Federal Minister for Climate Change Sherry Rehman said at a presser conference in Islamabad.

“With 33 million people affected by the disaster, we will need international humanitarian assistance to provide them with a modicum of relief and food security for now.”

She said the NDMA was conducting a needs assessment with the federal government working to send out a UN flash appeal for a humanitarian response to the calamity.

“Our federal and provincial governments are running out of resources as it is not within the capacity of any province or the State to deal with the disaster of such epic proportions alone. We also need communication, infrastructural assistance and air support once the weather settles,” she said.

Sherry said the country has suffered from the “worst humanitarian disaster of the decade”, which caused a large-scale loss of lives, property and livelihoods.

The minister said the need for shelter and relief was dire as conveyed by the provinces but the situation was still evolving and every day the needs assessments were changing as the rains didn’t stop causing floods.

She said the homeless people’s numbers were growing with Sindh asking for one million tents and Balochistan 100,000.