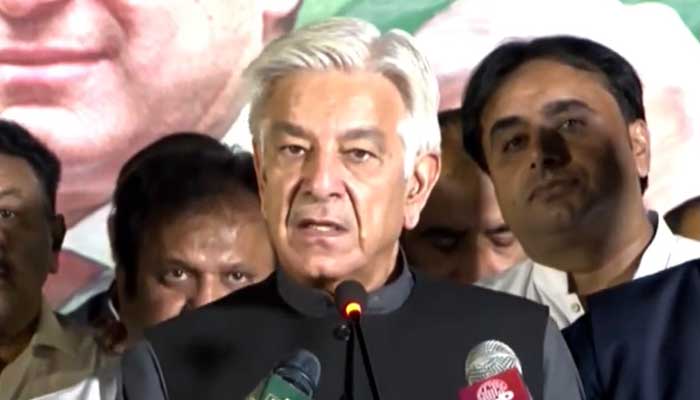 SIALKOT: Defence Minister Khawaja Asif Friday said that the province where Imran Khan was attacked is responsible for whatever happened on Thursday.

Asif, while speaking during a worker’s convention in Sialkot, said that akin to the province, the chief minister of the province is equally responsible for the attack on Khan.

“Whatever happened in the long march should be condemned,” Asif said, adding that taking political advantage of such incidents is also condemnable.

“Those who were injured did not receive any medical treatment,” the defence minister said.

He added that Prime Minister Shehbaz Sharif, Interior Minister Rana Sanaullah, and the establishment are being targeted for no reason.

“The federal government has not abandoned its responsibility,” he said during the address. The minister added that the PTI has not yet decided to file a case because they wanted to register a “first information report (FIR) of their choice.”

“They are fighting over whom to name in the FIR,” Asif said on PTI’s reluctance on registering a complaint.

Khawaja said that three video statements of the accused have been released in which he spoke about missing the target. He added that shells of not just the pistol but those of a submachine gun (SMG) have also been found at the place of the incident.

“Constitutional procedure will be followed to appoint the army chief,” Khawaja added while speaking on the crucial matter.

Speaking about the general elections, the minister said: “Assemblies’ time will end in August 2023 and election will be held in 90 days.”

Khawaja said that the PML-N would need to restructure in the present times, adding that “Khan misses the PM house and cannot sleep as a result.”

He criticised that not a single promise has been fulfilled in Khyber Pakhtunkhwa despite the PTI having a government in the province for the last nine years.

“Khan claimed to end corruption and was disqualified because of it,” Khawaja said adding that the party has gathered a lot of wealth and is now working hard to protect it.

The defence minister said that it’s a matter of a few days before the mess gets cleared up and shared hope about the situation improving in the upcoming days.

The minister, during the address, said that he realises the need to make social media effective. “Social media is not just for pictures. It should be for communication and information.”