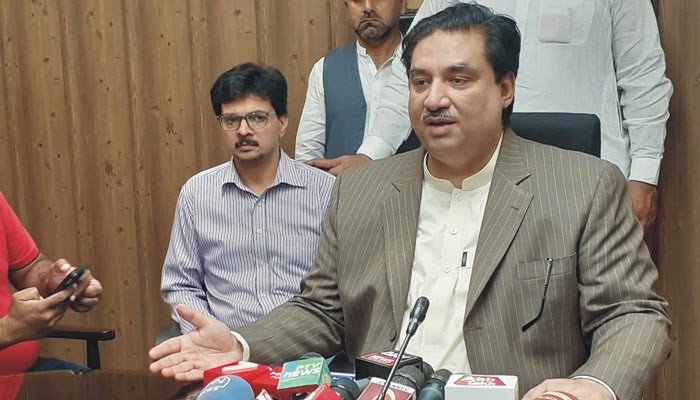 GUJRANWALA: Minister for Energy Khurram Dastgir on Saturday said that Prime Minister Shehbaz Sharif will take the decision on the appointment of the chief of army staff in London after holding consultations with party supremo Nawaz Sharif.

Addressing a press conference in Gujranwala, the energy minister, without taking PTI Chairman Imran Khan’s name, said that no matter how many times Khan meets with the army chief, the final decision will be taken by the prime minister.

On the other hand, Minister for Defence Khawaja Asif said that no process has been started to extend the army chief’s tenure nor there has been any suggestion in this regard.

His comments came while speaking during a press conference in Islamabad.

Earlier this week, the PTI chief rejected suggesting the extension of the tenure of Chief of Army Staff General Qamar Javed Bajwa till the next elections.

A day earlier, the former prime minister, while speaking during an interview with a private TV channel, had suggested that the appointment of an army chief should be deferred until the government is elected, which should then choose the new military head.

Asif, while talking about the army appointment, said that the policy was as per the Constitution as any sitting prime minister in November would have to decide the nomination of the next army chief.

“Nawaz Sharif did the process four times and this time Shehbaz Sharif will do it,” he said.

“This issue had never become popular on media and Imran Khan played a very negative role in this regard,” Asif added.

The defence minister said that this is a constitutional procedure and should be done in due time. “The army chief has his loyalty to the state and its Constitution. No one should question it,” he said.

He alleged that there were persistent attacks on the national security and stature of the nation and that Khan was a national criminal for sabotaging relief efforts and barring international agencies to stop aid to Pakistan.

The defence minister said that the premier will convene the National Security Committee meeting after his return and “issues pertaining to Khan’s statements jeopardising national security” will be discussed.