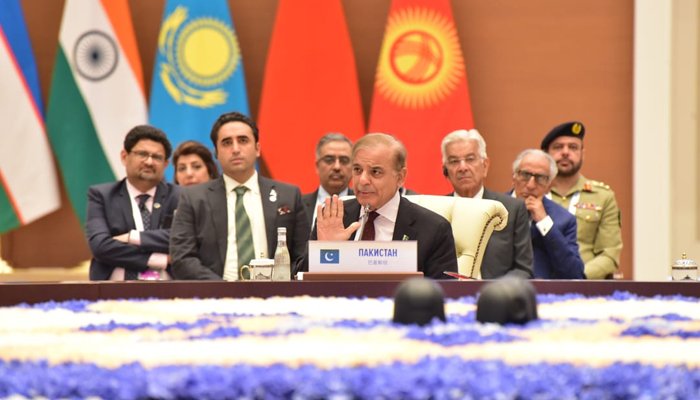 SAMARKAND: Prime Minister Shehbaz Sharif on Friday called for action against climate change that has caused cataclysmic floods in Pakistan as he said that “it’s time to act, act now.”

The prime minister was addressing the Shanghai Cooperation Organisation’s (SCO) Council of Heads of State (CHS), where he spoke about the climate catastrophe that has devastated Pakistan and killed hundreds.

The prime minister added that the floods — which have caused damages amounting to billions of dollars — make Pakistan look like “a sea of water”.

“The devastating floods in Pakistan are most definitely climate change-induced. It is the result of climate change, cloud outbursts, and unprecedented rains, combined with hill torrents coming down. All this put together makes Pakistan look like a sea of water,” the premier said.

Noting that he has “never seen this kind of devastation” before, the premier called on the organisation to “build a wall” against the menace of climate change.

The premier stressed that the SCO should make plans for the coming generations.

PM Shehbaz, along with leaders of the eight-member SCO, attended the close-format CHS at the Congress Centre, where he was welcomed by President of Uzbekistan Shavkat Mirziyoyev.

Record monsoon rains in the south and southwest Pakistan and glacial melt in northern parts triggered the flooding that has impacted nearly 33 million people in the 220 million South Asian nation, sweeping away homes, crops, bridges, roads and livestock in damages estimated at $30 billion.

Hundreds of thousands of people who have been displaced are in dire need of support in terms of food, shelter, clean drinking water, toilets, and medicines.

Many have been sleeping in the open by the side of elevated highways, with water-borne diseases spreading among people and affecting thousands.

The torrential monsoon, which submerged huge swathes of Pakistan, was a one in a hundred-year event likely made more intense by climate change, scientists said on Thursday.

At the outset of his speech, the prime minister noted that it was imperative to ensure that peace prevailed in Afghanistan as peace in Kabul meant there would be peace in Islamabad.

The premier added that it would be a “big mistake” to ignore Afghanistan this time around as the Taliban-ruled nation battles terrorism and poverty.

The prime minister said that the global community should work to support “good initiatives” in the war-torn country.

“Fight this menace of extremism, separatism and terrorism and wipe it from the face of this earth,” the prime minister said, urging the SCO members to join hands for this goal.

During a sideline meeting, Russian President Vladimir Putin said that pipeline gas supplies to Pakistan are possible, and that part of the necessary infrastructure is already in place.

“The prime minister reaffirmed Pakistan’s commitment to work closely with Russia to further expand and strengthen cooperation between the two countries across all areas of mutual benefit including food security, trade and investment, energy, defence and security,” a statement from PM’s Office said.

The two sides agreed to convene the next meeting of the Inter-Governmental Commission (IGC) in Islamabad at an early date, it said.

The long-delayed gas pipeline vital to the south Asian country’s economy — the Pakistan Stream gas project, also known as the North-South gas pipeline — is to be built in collaboration with Russian companies.

The two countries agreed in 2015 to build a 1,100 km (683 mile)-long pipeline to deliver imported liquefied natural gas (LNG) from Karachi on the Arabian Sea coast to power plants in the northeastern province of Punjab.

The pipeline’s designed annual capacity stands at 12.4 billion cubic metres (bcm), with the possibility to be increased to 16 bcm.

The project, due to be launched in 2020, was delayed after Russia had to replace the initial participant, which was hit by Western sanctions.

Sharif has said in recent weeks that his government was also interested in buying wheat from Russia if it was offered at better rates.

Meeting with other heads of states

The prime minister — during a meeting with Tajikistan’s President Emomali Rahmon — also expressed Pakistan’s resolve for the timely completion of the important CASA-1000 power project, aimed at the transmission of electricity from the Central Asian state.

The prime minister emphasised the expansion of cooperation in the field of road transportation and underscored the importance of connectivity.

He underlined Pakistan’s readiness to facilitate the provision of access to Gwadar and Karachi to Tajikistan.

President Rahmon extended profound sympathies and condolences over the loss of human lives and devastation caused by the floods in Pakistan and assured of Tajikistan’s full support in the efforts for relief and rehabilitation of the affected people.

PM Sharif thanked Tajikistan for its support to the flood-affected people in Pakistan and shared details of the devastation caused by the massive floods, induced by climate change.

He also held a meeting with President of Azerbaijan Ilham Aliyev, where both leaders expressed their mutual resolve to enhance bilateral cooperation in diverse areas including trade, energy and defence.

The two sides also emphasised strengthening the links in the fields of education and people-to-people contacts.

PM Shehbaz underlined the importance of unlocking the existing potential in the relationship by boosting bilateral engagement in the fields of trade, investment, agriculture, information technology and tourism.

He reaffirmed Pakistan’s principled support to Azerbaijan on Nagorno-Karabakh and congratulated on the historic success of the liberation of its occupied territories.

The prime minister also expressed condolences on the recent martyrdom of 71 Azeri servicemen in an unprovoked attack by Armenia.

He reiterated support for Azerbaijan’s right to self-defence in accordance with international law and in the protection of its territorial integrity.