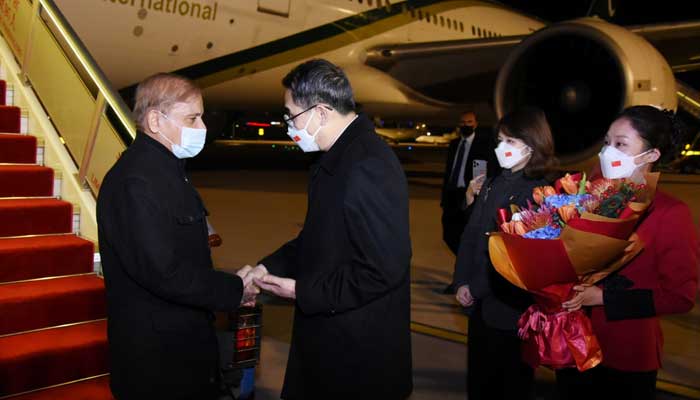 BEIJING: Prime Minister Shehbaz Sharif Tuesday landed in China’s capital city for his two-day official visit with a high-level delegation at the invitation of his counterpart Li Keqiang.

The visit is also PM Shehbaz’s maiden trip to China after he assumed office in April this year. The prime minister is expected to focus on revitalising the China-Pakistan Economic Corridor (CPEC) during his discussions with officials in Beijing.

Upon his arrival in Beijing, the premier was warmly greeted by the Chinese prime minister who extended a grand welcome to PM Shehbaz and his delegation at the Beijing Capital Airport.

At the airport, Pakistan’s diplomats to China were also present and welcomed the prime minister and his delegation.

Before departing for Beijing, the premier said that he was “honoured to be among the first few leaders to have been invited after the historic 20th National Congress of the CPC”.

He said that the second phase of CPEC is expected to usher in a new era of socioeconomic development that will improve the standard of living for our people.

The premier also said that there is a lot to learn from the Chinese economic miracle.

“This would be prime minister’s first visit to China since assuming office in April 2022 and follows his meeting with President Xi Jinping in Uzbekistan on September 16,” the spokesperson said in a statement.

The prime minister will be among the first leaders to visit Beijing following the historic 20th National Congress of the Communist Party of China, said the FO spokesperson.