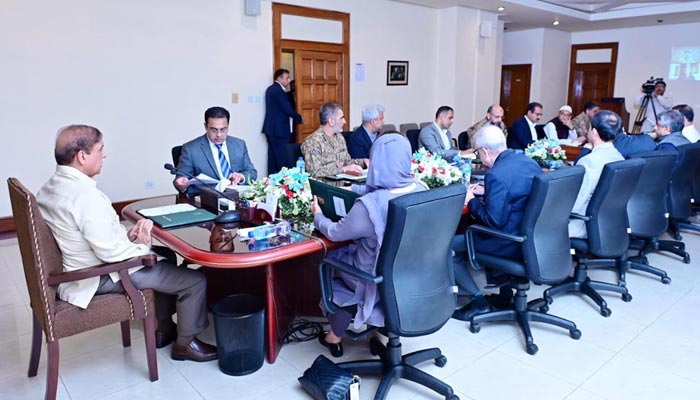 Prime Minister Shehbaz Sharif on Saturday asked the nation to generously and urgently donate baby food and blankets for the flood-stricken people.

Addressing a meeting to review rescue and relief operations in the areas affected by the floods at the Pakistan Air Force Base Nur Khan, the prime minister made the appeal in view of winter approaching.

“Small children affected by the floods are in dire need of food,” said the PM.

The prime minister said that the Pakistan Army and state machinery are working together for flood victims, adding that the Benazir Income Support Programme (BISP) has distributed Rs30 billion among the flood victims.

“BISP is a very reliable system and is accepted by foreign agencies,” he added.

During the Shanghai Cooperation Organisation (SCO) Council of Head of States (CHS) meeting in Samarkand, PM Shehbaz called for action against climate change that has caused cataclysmic floods in Pakistan saying that “it’s time to act, act now”.

The prime minister spoke about the climate catastrophe that has devastated Pakistan and killed hundreds.

The prime minister said that the floods — which have caused damages amounting to billions of dollars — make Pakistan look like “a sea of water”.

“The devastating floods in Pakistan are most definitely climate change-induced. It is the result of climate change, cloud outbursts, and unprecedented rains, combined with hill torrents coming down. All this put together makes Pakistan look like a sea of water,” the premier said.

The premier stressed that the SCO should make plans for the coming generations.

Record monsoon rains in the south and southwest Pakistan and glacial melt in northern parts triggered the flooding that has impacted nearly 33 million people in the 220 million South Asian nation, sweeping away homes, crops, bridges, roads and livestock in damages estimated at $30 billion.