Pakistan, US officials discuss ways to boost resilience in ties 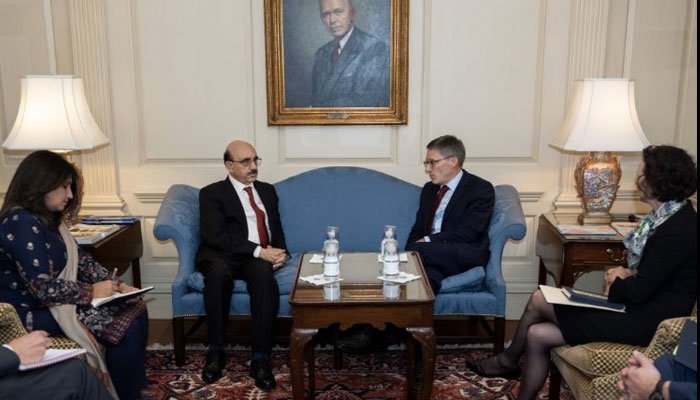 Pakistan’s Ambassador to the United States Sardar Masood Khan called on Derek Chollet of the US State Department at the premises of the State Department, Geo News reported Tuesday.

Both diplomats discussed the longstanding partnership between Pakistan and the US. They also agreed to further grow bilateral ties in different areas, including health, agriculture, education, entrepreneurship, and energy, the Counsellor/Senior Policy Advisor to Secretary of State Antony Blinken said on his official Twitter account.

The two countries agreed to enhance bilateral cooperation for the benefit of their respective nations and the region.

Pakistan’s envoy to the US said he discussed with the senior policy advisor the ways to build further resilience in relations between the two countries.

The Pakistan envoy thanked the advisor and said high-level visits, people-to-people exchanges and effective communication would continue to strengthen relations.

Pakistan one of ‘most dangerous’ countries: Biden

The meeting took place a couple of days after US President Biden declared Pakistan to be one of the most dangerous countries, calling into question the safety of the country’s nuclear arsenal. The White House played down the statement by the US president.

The United States said Monday that it had confidence in Pakistan’s ability to control its nuclear arsenal.

“The United States is confident of Pakistan’s commitment and its ability to secure its nuclear assets,” State Department spokesman Vedant Patel told reporters on Monday.

“The US has always viewed a secure and prosperous Pakistan as critical to US interests and, more broadly, the US values our long-standing cooperation with Pakistan,” he said.

Biden made the off-the-cuff remarks on Pakistan’s nuclear programme Thursday while at a private Democratic Party fundraiser in California, where he began to discuss challenges facing President Xi Jinping of China, a close ally of Pakistan.

Islamabad summoned the US ambassador to Pakistan, Donald Blome, and lodged a protest against the remarks.

Prime Minister Shehbaz Sharif tweeted that Pakistan was a “responsible nuclear state” and that it takes safety measures “with the utmost seriousness.”

Foreign Minister Bilawal Bhutto-Zardari said that Biden’s remarks should not hurt relations, noting that the president was not speaking at an official function.